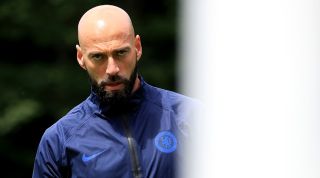 Victor Wanyama is likely to join Georges-Kevin Nkoudou in leaving Tottenham in the final days of the European transfer window, according to The Sun. Belgium’s Club Brugge have offered £9 million for Wanyama, but Spurs want to seal an £11m deal before the September 2 deadline. Turkish club Besiktas signed Nkoudou for £4.6m on Thursday.

Chelsea’s Argentina goalkeeper Willy Caballero is wanted by Real Madrid, according to Marca (via Football Espana). The Spanish paper also reports that a delegation from the club is in Paris to try to finalise a deal to buy Brazil striker Neymar from Paris Saint-Germain. L’Equipe has reported Real’s initial offer of €100m (£91.4m) plus three players – Gareth Bale, James Rodriguez and goalkeeper Keylor Navas – was rejected by PSG.

Italian publication Gazzetta dello Sport says Manchester United are close to agreeing a deal to sign former Tottenham and Spain forward Fernando Llorente. The 34-year-old is out of contract, having been released by Spurs at the end of last season, and could boost United’s striking options after their sale of Romelu Lukaku to Inter Milan. The Daily Mail, however, says United are not interested.

Christian Benteke, 28, and James Tomkins, 30, are negotiating to extend their contracts with Crystal Palace, according to The Guardian.

Adrien Silva: Leicester’s Portuguese midfielder is to have a medical in Monaco on Friday ahead of a season-long loan deal, the Daily Telegraph reports.