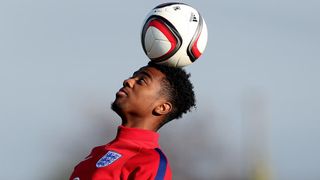 Manchester United rising star Angel Gomes has the potential to be as good as Andres Iniesta, according to his former coach.

The 16-year-old became the youngest player to make a competitive appearance for United since Duncan Edwards in 1953 when he replaced Wayne Rooney in Sunday's 2-0 Premier League win over Crystal Palace.

Paul McGuinness coached the likes of Paul Pogba, Marcus Rashford and members of the famed 'class of 92' side during a long career with the United academy, which came to an end last year.

And he believes Gomes has the ability to become a true great, despite his diminutive stature sometimes being seen as a disadvantage.

"I suppose that's our country. People doubt players if they're short in stature but no-one is doubting Andres Iniesta or David Silva. He's got the potential to be that type of player and, in England, you just don't get many players like that.

"If you play him with better players, he'll get better himself and create chances for them. You don't want to build him up too soon but I'm sure they'll handle all that at United."