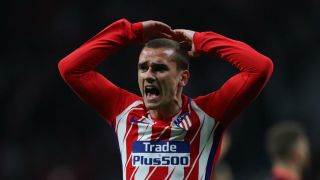 Atletico Madrid and France star Antoine Griezmann confirmed he would announce his future in the coming days.

Griezmann, 27, continues to be linked with a move to LaLiga champions Barcelona after another fine season at Atletico.

The forward has been expected to confirm his future before the World Cup and said Saturday that was still the case.

"It's good that you're taking an interest," Griezmann said after France's 1-1 friendly draw with the United States.

"There's a week to go. I think we will find out this week."

Griezmann is contracted at Atletico – the club he joined in 2014 – until 2022, but Barcelona are reportedly prepared to trigger his €100million release clause.

Reports Saturday suggested France coach Didier Deschamps had told Griezmann and Monaco midfielder Thomas Lemar to clarify their futures by the end of the week.