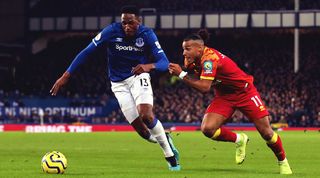 Norwich City haven't had an awful lot to shout about on the road this season, but a 2-0 win over Everton in the autumn was one of the highlights of a drab season.

The Canaries have clearly got a lot of quality in their ranks. Max Aarons, Ben Godfrey, Teemu Pukki and Emi Buendia have all given fantastic accounts of themselves this season - not to mention Todd Cantwell, who got the first against Everton the last time these two sides met. Norwich will be hoping to do the double - they need to pick up points quickly if they're going to climb out of the bottom three.

That day, the pressure mounted on Toffees boss Marco Silva, as Everton spiralled further and further. The turnaround under Carlo Ancelotti has been great, however. The legendary Italian has his new side playing with vigour, intensity and a front two of Richarlison and Calvert-Lewin to trouble any defence in the league. They were unlucky not to take three points from the Merseyside derby on Sunday, after chances didn't quite go their way.

Kick-off is at 6pm BST and the game is being shown on BBC One, BBC Two, and BBC iPlayer in the UK. See below for watching details where you are.

SEE THE FULL SCHEDULE Premier League live streams: How to watch every game on this week

If you’re on holiday or just simply out of the country, your domestic on-demand services won’t work – the broadcaster knows exactly where you are from your IP address. Your access to the game will be automatically blocked, which is annoying if you’ve paid a subscription fee and don't want to use an illegal, buffering stream that makes you miss another Teemu Pukki strike. And that's where we recommend ExpressVPN (more on which below).