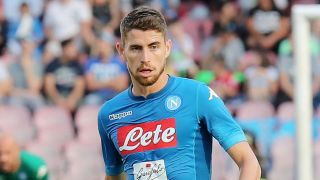 Italy international Jorginho has been a reported midfield target for Premier League champions City throughout the transfer window and was thought to be close to sealing a move to the Etihad Stadium.

However, rumours started to gather pace this week that Jorginho will instead sign for Chelsea, who Maurizio Sarri is highly tipped to take over once his situation at Napoli is resolved, with current coach Antonio Conte having overseen pre-season training thus far.

De Laurentiis, speaking at a news conference to present Carlo Ancelotti as the club's new boss, insists that Jorginho's move to Chelsea is not reliant on Sarri's future, though.

"We said to ourselves if Jorginho has any requests, we'll take them into account," he said.

"I accepted Manchester City's offer 15 days ago but I have to apologise to them.

"Jorginho to Chelsea is not tied to Sarri."

Napoli's Sarri saga has rumbled on since the end of last season, with the Italian having two years left on his contract despite the club having already named a successor.

De Laurentiis believes a resolution is close, though, adding: "His case is at the finish line, it depends on him. We'll see what happens in the next hours.

"My lawyers have submitted the text to his lawyers."