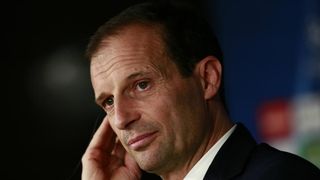 Massimiliano Allegri has been linked with becoming Arsenal's new manager, but Juventus plan to hold talks with the coach over his future once the Serie A title is secured.

Allegri's men are on track for a fourth consecutive domestic double of his time at the club, Juve facing AC Milan in the final of the Coppa Italia on Wednesday.

Juventus are virtually certain to win the Scudetto for the seventh season in a row – Napoli are six points back with two games to go – but speculation Allegri could leave has intensified.

The Italian previously indicated his next job will be away from his homeland and, along with former Barcelona coach Luis Enrique, he is reportedly a frontrunner to succeed Arsene Wenger at the Emirates Stadium.

Juventus chief executive Giuseppe Marotta, though, suggested Juve remain hopeful Allegri can be persuaded to stay at the club, having led the Bianconeri to the final of the Champions League on two occasions.

"With Allegri we have a relationship that has worked and does work," Marotta said to Rai Sport.

"After winning the Scudetto we'll talk about the future, which I'm sure will be full of satisfaction together.

"The maths still doesn't allow us to celebrate [winning the league]. We have to be realistic, we can virtually taste it, but we want to get that point. We need to make it mathematically certain and real."