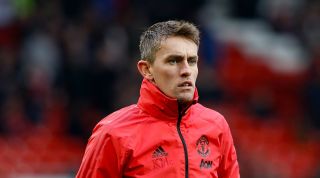 Ole Gunnar Solskjaer's side are currently ninth in the Premier League table, although they will move to within three points of the top four if they beat Chelsea on Monday.

United are still in the FA Cup - they will face Derby in the fifth round next month - and are scheduled to take on Club Brugge in the last 32 of the Europa League.

And while the Red Devils are still seeking Champions League qualification, McKenna says the club are also targeting a piece of silverware.

“It would be massive. Everyone is very determined to make that happen," he told United's official website.

“We can say it is a young group and one that has to grow, but it is Man United and everyone wants to be part of trophy-winning teams. That would be a big step.

“It's a group that is growing in experience. Last season, we had two quarter-finals where they came up short against Barcelona in the Champions League and obviously in the FA Cup.

“The first cup competition this season, we have just lost to Manchester City over the course of two legs, 3-2, so they are gaining some experiences.

“We have a couple of players in the group who have won trophies, but for a lot of the group they haven't been to semi-finals, or finals, or competing for league titles, so they are only going to benefit from putting themselves to play in big games, in big semi-finals, in big finals, and when you get to those stages you want to win them.

“For the growth of the team, it is about the process of getting to those big matches, understanding what it takes to win them and the more they go through those experiences, the more likely they are to win trophies.”