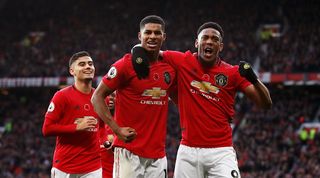 The former trio have scored a combined 39 goals in all competitions this season - more than Liverpool's frontline of Sadio Mane, Roberto Firmino and Mohamed Salah.

And Solskjaer has praised his "exciting" forwards and tipped them to follow in the footsteps of Ronaldo, Rooney and Tevez, who won two Premier League titles and a Champions League together at Old Trafford.

“I was here with Ronaldo, Tevez, Rooney - that’s what we want as supporters and manager, express yourselves, put the fear to their defenders. We’ve got Daniel James here as well so I am very excited for it.

“I believe in ours, going to add to them, definitely, but in the years coming we’ll see lots of them.

“Liverpool have scored more goals than us outside the front three so I'm not going to say ours are better or theirs are better. Sunday will be a game by itself.

“The front three they’ve [Liverpool] got have been playing together for ages, seasons now, and you can see the rotation movements, understanding and we hope our front three will get that understanding.

“I think I’ve only started them together once in the Premier League [in a 4-1 win over Newcastle], so we’ve got a way to go to get the understanding but they scored four goals in that game.”

Liverpool will be looking to maintain or extend their 14-point lead at the top of the table when they host United on Sunday.

The Reds have not won a league title since 1990, and Solskjaer insists United - who have not finished on top of the pile since 2013 - will not have to wait their long for their 21st crown.

"That's what we're working hard to make sure doesn't happen [a 30-year wait],” he added. “Let [Liverpool] be a lesson for us.

“We can't let ourselves go another 24 years without winning the league. I believe in this club. We will get there."