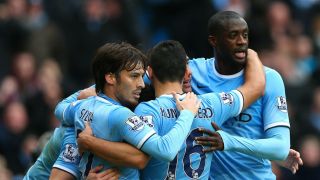 It is 10 years since the Abu Dhabi United Group's stunning takeover of Manchester City drastically altered the future trajectory of the club and the Premier League.

The rate of investment has seldom let up over the subsequent decade, with three Premier League titles, as many EFL Cups and an FA Cup to show for an estimated £1.4billion outlay on playing staff.

Robinho - the unlikely trailblazer - was not alone in failing to make a telling impact in Manchester following a big-money transfer, but the five players below proved to be inspired pieces of business

Increasingly regarded as City's finest ever player, the mercurial playmaker arrived from Valencia for £25million in 2010 with a newly acquired World Cup winners' medal in his pocket. Silva has been integral to every City title triumph since. Whether gilding Roberto Mancini's powerful line-up, dazzling as the creative inspiration under Manuel Pellegrini or lifting Pep Guardiola's current vintage to new heights, City have always been a significantly better team with Silva in the line-up.

Thank you for all the support throughout the season. Time to enjoy the night,   May 6, 2018

Derided in some quarters as an over-priced defensive midfielder when he joined from Barcelona for £24m during the same close-season as Silva, Toure proved to be so, so much more. The most dominant and complete midfield presence of the era, he became City's 'clutch' player, amassing a collection of memorable goals in Wembley showpieces and title run-ins. The towering Ivorian was indisputably at his peak when he scored a staggering 20 Premier League goals from central midfield on the way to the title in 2013-14.

Thank you to everyone for a very special night at the Etihad! It really means a lot.  May 10, 2018

SERGIO AGUERO
City fans would understandably argue Aguero is worth a place on this list for his heart-stopping intervention to snatch their first Premier League title against QPR in 2012. That unforgettable moment aside, the Argentina striker's insatiable appetite for goals has him way out in front at the head of City's all-time list on 204. His recent treble against Huddersfield was his 13th hat-trick for the club. In every season since he joined in 2011-12, the £38m man has topped City's scoring charts in all competitions.

Eyebrows were raised when City broke their transfer record to bring in the reigning Bundesliga Player of the Year from Wolfsburg in August 2015 following his failed spell at Chelsea. The Belgium star soon made the £55m fee seem wholly worthwhile as a relentless work-rate, vast range of passing and rasping shot from either foot established him as one of the leading lights in England's top flight. An assist machine – De Bruyne has 44 in 101 Premier League appearances – he was Guardiola's standout performer as City stormed to glory in 2017-18.

5 – The top players in terms of open play goal sequence involvement (involvement in the build up to an open play goal) this season in the Premier League:46 – Kevin De Bruyne44 – Mohamed Salah37 – Raheem Sterling34 – David Silva31 – Harry Kane/FernandinhoFrequent. May 15, 2018

Guardiola spent heavily on defensive reinforcements as he overhauled the squad left to him by Pellegrini but no man has been a more important recruit for the Catalan than the man stationed behind his backline. Ederson brought much-needed authority to City's defence after Claudio Bravo's haphazard year with the gloves, while his composure and skill with the ball at his feet regularly beggars belief. Without the Brazil international, it would have been impossible for Guardiola to so fully realise his footballing vision at the Etihad Stadium last term, while his price of £34.7m looks a relative snip in the current market for goalkeepers.