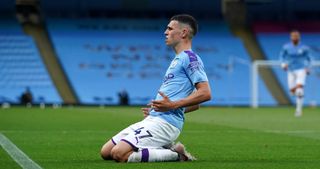 Manchester City have officially taken their foot off the gas, with little left to play for. Last weekend's shock defeat to Southampton was evidence of that and now, without any games against Liverpool to keep them motivated, it's likely Pep will have his players focused on Champions League assignments instead.

That being said, an even half-motivated City are more than capable of causing Newcastle plenty of problems. Steve Bruce's side are sitting comfortably in mid-table after an excellent campaign until now. They also have little left to play for so you can expect it to be one of the games of the season for no reason whatsoever.

Kick-off is at 6pm BST and the game is being shown on BT Sport 1 / BT Sport Extra 1 / BT Sport Ultimate in the UK. See below for watching details where you are.

If you’re on holiday or just simply out of the country, your domestic on-demand services won’t work – the broadcaster knows exactly where you are from your IP address. Your access to the game will be automatically blocked, which is annoying if you’ve paid a subscription fee and don't want to use an illegal, buffering stream that makes you miss another Kevin de Bruyne assist. And that's where we recommend ExpressVPN (more on which below).