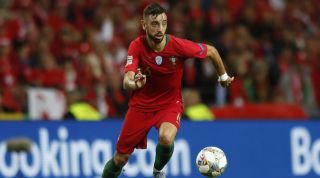 Fernandes was constantly linked to some of the Premier League's biggest clubs last summer but no move materialised.

Manchester United were rivalled by Tottenham Hotspur and Manchester City in the race for Fernandes' signature.

The wave of interest in Sporting Lisbon's crown jewel followed a 32-goal season - the most ever recorded from midfield.

Tottenham were believed to have come closest to signing Fernandes, but the lack of offers for Christian Eriksen is thought to have stayed their hand.

Eriksen is still on United's radar, along with Leicester City's James Maddison, but their reported renewed interest in Fernandes suggests he's a priority.

Ole Gunnar Solskjaer is desperate to sign a creative midfielder and sees the 25-year-old as the ideal solution, according to Goal.

Fernandes signed a new deal at Sporting in November that will keep him at the club till 2023, unless his new €100m release clause is met.

Considering United will likely pay a similar price for James Maddison, it doesn't seem that money is a limiting factor.

The revival of United's interest in the Portuguese international is reportedly part of a new scouting initiative in the country.

United are understood to be sending scouts to watch all remaining Porto, Benfica and Sporting games this season.

Solskjaer recently revealed Paul Pogba would still be out of action for up to a month longer, and there's still speculation regarding his future at Old Trafford.

His contribution of goals and assists are not being made up by any midfielders currently, and is a reason for the Reds' proposed dip into the market.

Christian Eriksen could be on the move away from Tottenham this month. What club would suit him?