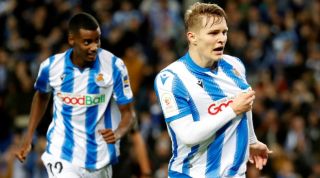 Odegaard is currently on loan from Real Madrid at Sociedad and Bout was pictured in the stands watching their 3-0 La Liga win over Valencia.

There is a precedent when the Dutchman goes to see players in the flesh. As the Manchester Evening News reports, Bout was present for Erling Haaland's last match for Red Bull Salzburg.

A few days later Ole Gunnar Solskjaer met with Haaland's representatives, but the striker instead decided to join Borussia Dortmund during the January transfer window.

Now it seems Solskjaer has turned his attention to another fellow Norwegian in Odegaard.

The 21-year-old has been in fine form for Sociedad this season, with seven goals and eight assists in 25 appearances in all competitions.

Manchester City had been linked with Odegaard, but they say there is no interest. Both City and United invited the Norway international for tours before he decided to join Madrid from Stromsgodset in 2014.

Bout was also said to be watching a midfielder and a forward from Valencia during the game.