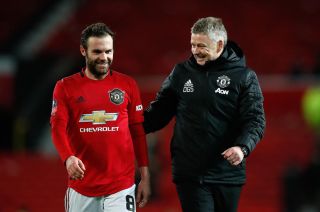 Juan Mata’s second-half strike saw Manchester United advance to the FA Cup fourth round but their 1-0 victory over Wolves was soured by an injury scare to Marcus Rashford at Old Trafford.

Mata skilfully lifted over Norwich goalkeeper John Ruddy midway through the second half but, four days before a visit to Premier League leaders Liverpool, Rashford then hobbled off barely 15 minutes after coming off the bench.

The England forward clutched his back as he made his way towards the tunnel in the 80th minute, putting a dampener on an evening where United had to occasionally ride their luck to set up a clash with either Watford or Tranmere.

Pedro Neto had a goal ruled out because of Raul Jimenez’s inadvertent handball before providing the assist early on in this third round reply while Matt Doherty headed against the post.

But United, who failed to muster a shot on target in the 0-0 draw at Molineux 10 days ago for the first time since January 2015, largely bossed the second half and probably deserved to shade the contest.

They had beaten Norwich 4-0 at the weekend, largely thanks to a double from Rashford, who was dropped to the bench, as Mason Greenwood, Daniel James and Sergio Romero were all brought into the starting line-up.

Ruddy – who replaced Rui Patricio in goal in Wolves’ only change from the weekend draw against Newcastle – was able to get enough contact on the ball to prevent James dashing by him after Mata’s expert clip over the top.

Jimenez’s tame shot after sharply turning past Victor Lindelof gave Sergio Romero a simple save and the Wolves forward was in the thick of the action again as the visitors had a goal chalked off by VAR after 10 minutes.

Wolves goal disallowed. The new handball law is utterly absurd, exacerbated by the existence of VAR that has no choice but to pick out every flick of a knuckle.— Gary Lineker (@GaryLineker) January 15, 2020

Fred’s attempted clearance cannoned off Nemanja Matic and into the path of Jimenez, whose unwitting handball in a challenge with Harry Maguire meant Neto’s calm finish counted for nothing.

The visiting fans chanted ‘it’s not football any more’ in frustration at the ruling, the second time across this tie Wolves have been left cursing the technology, with an identical infraction at Molineux denying Doherty a goal.

Doherty went close to breaking the deadlock here but his header across goal came back off the post although United, who were seeing plenty of the ball, went close as Mata’s curling effort led to a smart save from Ruddy.

James again went clean through as the half wound to a close but once more found Ruddy a difficult proposition, the former Norwich goalkeeper spreading himself and denying the youngster with his shoulder.

James flashed an effort wide from a narrow angle but there was a lack of incisiveness from either side, prompting United boss Ole Gunnar Solskjaer to introduce Rashford and Andreas Pereira after 64 minutes.

Neither was directly involved in the opener three minutes later as a routine ball forward to the halfway line caused havoc in Wolves’ back-line with Anthony Martial freeing Mata down the centre.

The Spaniard went clean through on goal and held his nerve to exquisitely chip over the advancing Ruddy.

However, barely 15 minutes after being introduced, a clearly discomforted Rashford, who had moments earlier taken a knock to the back by Doherty, made way for Jesse Lingard before heading straight down the tunnel.