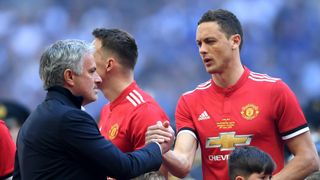 Nemanja Matic has urged Manchester United to back manager Jose Mourinho in the transfer market by stating "a few more good players" are required for a Premier League title push.

After being the closest challengers to Pep Guardiola's record-breaking Manchester City in the league, United were runners-up again as they lost the FA Cup final 1-0 to Chelsea on Saturday.

Eden Hazard converted a 22nd-minute penalty after he was sent to ground by a hapless Phil Jones tackle, with Thibaut Courtois impressing in the second half as the Red Devils were kept at bay.

Despite finishing the season without a trophy, Matic is confident United can compete for honours next term with some high-quality additions.

"I think with a few more good players in the squad we can fight for the title, of course, and I'm sure we will do it," said the Serbia international.

On United's performance against his former club at Wembley, Matic added: "I don't know what we did wrong but we had one mistake when we conceded the goal, but I think that we played good football for 90 minutes.

"I think that we deserved more but this is football, one mistake and sometimes you can lose the game and this is what has happened to us.

"I'm not disappointed, we tried, obviously we tried but we played against a very good squad, the defence is very organised, it's not easy to create the chances. We had some that we didn't use. To win the game you have to score goals but as I said I think we deserve more."

1 - Jose Mourinho has lost his first ever domestic cup final in England, winning each of his previous five (excl comm shield). Blunted. May 19, 2018

Matic revealed Mourinho did not talk to the players following their loss, but he was confident the manager had a similar view on the display.

He said: "We didn't speak with him but I think he saw the game in the same way, he saw that we played good football, especially the second half we controlled the ball all the time so he must be happy with how we played, how we organised in the game but of course, when you lose the game, we are not happy."

Ander Herrera was pleased with United's progress in 2017-18 and wants to help ensure they keep putting themselves in position to bring more silverware to the club.

"I think we are going to it [the Premier League title] the right way. In this season we cannot take credit out from what Manchester City have done because they deserve the title and they have been almost perfect this season," said Herrera.

"So I think we have to keep going to this way. I think we are doing things right. Try to be back playing finals - I've been here already four seasons and I've played a lot of finals which is very good, so this club is about trophies.

"But first of all to win trophies you have to play in finals and I think we are doing that."