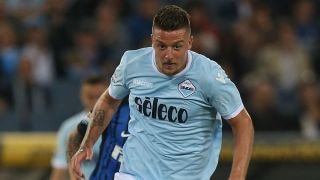 Sergej Milinkovic-Savic has the quality to play for any team in Europe, according to former Lazio striker Hernan Crespo.

The 23-year-old scored 14 goals in all competitions last season for Lazio and impressed during Serbia's 1-0 win over Costa Rica at the World Cup on Sunday.

Lazio director Igli Tare previously said the Serie A club have not received any offers for the midfielder, though they would consider a transfer if a bid was lodged.

Crespo - who played for the Biancocelesti between 2000 and 2002 - is impressed with Milinkovic-Savic's physicality and thinks he would be the perfect fit for the Premier League.

"Milinkovic-Savic is a great player," he told Goal before Serbia's opening World Cup victory. "He is a player that plays everywhere. He is very physical.

"If he went to the Premier League next season, he would be great. He plays very well as a physical midfielder and he gets into the box almost effortlessly.

"I think he is ready to play for any club in Europe. I don’t talk about money, but he is very strong."

Milinkovic-Savic will likely be involved in Serbia's next Group E clash against Switzerland on Friday as his side seek to secure qualification to the knockout rounds.