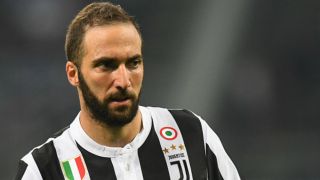 Giuseppe Marotta said there has been "nothing concrete" from Chelsea and AC Milan regarding Gonzalo Higuain, though the Juventus chief executive admitted the striker could be sold following the arrival of Cristiano Ronaldo.

Higuain has been linked with a reunion with former Napoli boss Maurizio Sarri at Premier League side Chelsea, while the Argentina international's name has emerged as a possible makeweight in a deal for AC Milan defender Leonardo Bonucci.

Marotta revealed the Serie A champions are weighing up their options after Ronaldo's high-profile arrival from Real Madrid left Juve inundated with forwards.

"I won't deny that with the addition of Cristiano Ronaldo we've got a quality attacking department that's a bit crowded," Marotta Sky Italia.

"We'll evaluate things with Higuain, but nothing concrete has arrived from Chelsea and Milan."

Higuain arrived from Italian rivals Napoli for €90million in 2016 and the 30-year-old has helped Juve to back-to-back Serie A and Coppa Italia titles.