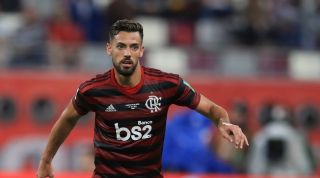 Pablo Mari says it is a "great achievement" for him to earn a move to Arsenal.

Mikel Arteta's side completed the signing of the defender from Flamengo in an initial loan deal on Wednesday.

Arsenal have paid £4m to borrow the Spaniard until the end of the season, when they will have the opportunity to buy him outright for a further £8m.

Mari arrives at the Emirates Stadium having recently won the Copa Libertadores with Flamengo.

Before moving to Brazil in 2019, the central defender spent three years on the books of Manchester City without ever making a first-team apperance.

And the 26-year-old says he is "delighted" to be back in the Premier League.

"When I spoke to my agent, it was a big thing that Arsenal were interested in me," he told Arsenal Player.

"This is one of the best clubs in the world, so I am absolutely delighted to be joining. I’m really looking forward to playing in this jersey and helping my team.

"The conversations started a couple of weeks ago. Arsenal told us that they were interested. We’d just won everything with Flamengo – I won the league and the Copa Libertadores and was also named best centre-back in America, so that will have helped Arsenal notice me.

"It’s a great achievement for me to come to Arsenal and it all happened in basically two weeks.

"I’m kind of used to [all the attention] from Brazil, where the fans are really passionate about Flamengo. I’m used to a lot of media interest so I know what to expect when joining a big club like this one. It’s a normal thing for me now."

Following Monday's 2-1 victory over Bournemouth in the fourth round of the FA Cup, Arsenal return to Premier League action against Burnley on Sunday.