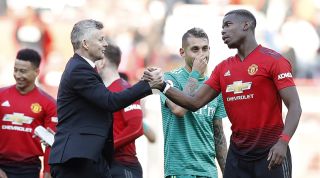 Manchester United may have to be prepared to break the bank if they want to keep Paul Pogba for the long term. The Sun reports that the club are open to starting negotiations with the Frenchman, but he's said to want a top pay packet of £500,000 per week. With Real Madrid reported to be lining up a summer bid for the 23-year-old midfielder, United may be willing to meet the demands.

Meanwhile, United look poised to agree to David de Gea’s wage request to fend off PSG, the Independent says. The goalkeeper has been in lengthy talks with the club amid a deadlock on a demand for a £350,000-a-week salary, it says, but that could be about to change as the clock ticks down on the Spaniard’s current contract – which ends next summer.

Neil Warnock could be set to leave Cardiff at the end of the season, the Mail says. It is reported that several players believe the Bluebirds boss may end his reign at the end of the term even if he can save them from relegation. The club currently hold the final relegation spot, five points adrift of Burnley, Southampton and Brighton.

After Steve McClaren’s sacking, attentions are turning to the former QPR boss’s replacement. According to the Evening Standard, former Tottenham and Aston Villa boss Tim Sherwood looks to be leading the race, with Charlton manager Lee Bowyer and Wycombe manager Gareth Ainsworth also tipped to be among the shortlist.

Eric Bailly: The Manchester United defender could be heading to Real Madrid, The Sun reports, with Zinedine Zidane said to be targeting the 24-year-old for a £35million move in the summer.

Declan Rice and Callum Hudson-Odoi:  In a bid to strengthen his squad with British players, Manchester United boss Ole Gunnar Solskjaer is said to be eyeing the England international duo, The Times says.

QUIZ! Can you name the three most expensive signings for every Premier League club?