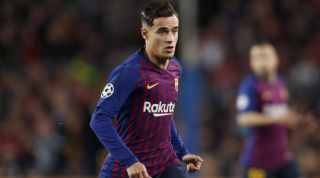 With Eden Hazard yet to publicly announce his decision on his Chelsea future, the club are keeping tabs on Barcelona’s Philippe Coutinho, the Mirror reports. Rumours continue to swirl around links between Hazard and Real Madrid, and should the 28-year-old opt to walk away from Stamford Bridge, the Blues could look to Coutinho as a replacement, the paper says.

A question mark remains over whether Everton can persuade loanee Andre Gomes to stay at Goodison Park, according to the Liverpool Echo, with boss Marco Silva reportedly extremely keen to secure a permanent deal for the Barcelona midfielder this summer.

Rafael Benitez‘s future as Newcastle boss will be decided after talks with owner Mike Ashley next week, the Daily Mail says. The Spaniard has been in charge at St James’ Park for three seasons and appears popular with fans after finishing 13th in the league this term.

Doubts remain over whether West Ham will be able to hold off big clubs such as Manchester United and Cheslea in their pursuit of Declan Rice, the Mirror reports, with boss Manuel Pellegrini seemingly offering no certainties on the where the 20-year-old’s future could lie.

Leicester look to replace Maguire with Tarkowski this summerhttps://t.co/rMwSLqglV2pic.twitter.com/TF5opryGES— The Sun Football ⚽ (@TheSunFootball) May 12, 2019

Matthijs De Ligt: After landing team-mate Frenkie De Jong, Barcelona are reportedly hoping to add the Ajax centre-back to their ranks. But the Spanish giants could face competition from Liverpool, who hope to link up the Dutch 19-year-old with international team-mate Virgil van Dijk, the Mirror reports.

Alexandre Lacazette: The Arsenal striker had admitted being “flattered” by interest from Barcelona, Goal reports, with it suggested the striker could be targetted as a possible signing if Camp Nou bosses fail to land Antoine Griezmann.