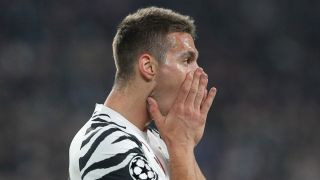 Marko Pjaca is set to join Schalke on loan from Juventus, according to the Bundesliga club's sporting director Christian Heidel.

Juve head coach Massimiliano Allegri has hinted Pjaca would be allowed to leave on a temporary basis, having failed to make a single Serie A appearance this season.

Schalke appear to have won the race to sign the Croatia international, with the completion of a loan move expected imminently.

"As things stand, Marko Pjaca will be joining us tomorrow [Thursday]," Heidel said.

"Everything has been agreed verbally, and we have the medical lined up for tomorrow."

Pjaca returned from eight months out due to a cruciate ligament injury with the Bianconeri's youth team in November, but has been unable to break into Allegri's plans.

: As things stand, Marko will be joining us tomorrow. Everything has been agreed verbally, and we have the medical lined up for tomorrow. January 3, 2018

Second in the Bundesliga, Schalke have already confirmed the signing of Germany Under-21 international Cedric Teuchert from Nurnberg in the January transfer window.

The 20-year-old forward signed a three-and-a-half-year contract with Schalke on Wednesday.

Schalke return from the Bundesliga's mid-season break with a trip to RB Leipzig on January 13.