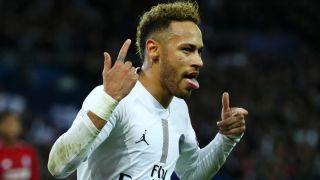 Neymar, Paul Pogba and Luis Suarez have all missed out on the top 10 of the Ballon d'Or.

Luka Modric is the favourite to be crowned winner of the prestigious individual prize on Monday, with Cristiano Ronaldo and Antoine Griezmann his main competition.

Ronaldo and Barcelona superstar Lionel Messi have won the award five times each in a decade of dominance for the duo.

Neymar has long-been touted as a future winner of the Ballon d'Or but the Paris Saint-Germain and Brazil star ranked 12th in the final reckoning.

Pogba also missed out on the top 10 despite playing a leading role in France's triumph at the World Cup, with his international team-mate and Chelsea midfielder N'Golo Kante finishing four places higher.

Thibaut Courtois was 14th in the voting, the Belgium and Real Madrid goalkeeper the top player for his position.