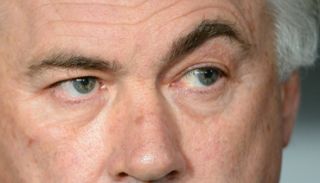 "I have asked the club to leave and I am waiting for their answer because I am under contract," Ancelotti said at the Ligue 1 awards ceremony after being named coach of the season along with Saint-Etienne's Christophe Galtier.

APP:Ligue 1 stats at your fingertips with Stats Zone, and it's completely FREE

Italian Ancelotti joined PSG, who are owned by Qatar Sports Investments (QSI), in December 2011, leading them to their first French league title since 1994 last weekend.

"We've had discussions, he asked to leave for Real Madrid. I said that it's not possible because he has one more year on his contract," president Nasser al-Khelaifi told Qatar-owned TV channel BeIN Sport.

Ancelotti declined to confirm that he wanted to join Real Madrid.

"We've had a meeting with the president [Nasser al-Khelaifi] and Leonardo," he said.

"We must wait for the answer of the club, who will decide for their future and for me. Real [Madrid] is a possibility but I have one year left in my contract. It's the club who will decide.

"We must decide together because my decision is to leave the club. It is not easy because I've had a good relationship with everyone. It's not the right moment to explain the reason why I want to leave the club and maybe I will never explain it."

Quizzed on the matter after being named the best player of the Ligue 1 season, Paris Saint-Germain striker Zlatan Ibrahimovic said: "I don't want him to leave."

Earlier this week, Al-Khelaifi told Reuters that he had turned down a Real Madrid move to hire Ancelotti.

"They [Real] came and I discussed it with them. He's got a contract with us for one more year... for me, he's here next year," Al-Khelaifi said on Monday.

Ancelotti, 53, won league titles with PSG, AC Milan and Chelsea, also taking the Italian club to the Champions League title in 2003 and 2007.

His contract at PSG was automatically renewed by one year until June next year when the club secured a Champions League spot for next season.