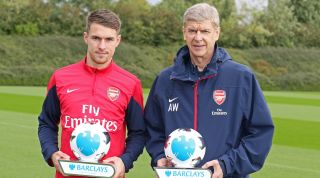 The Gunners scooped both monthly prizes after winning all four of their league matches against Tottenham, Sunderland, Stoke and Swansea.

Ramsey, picking up his first-ever award, netted four times during the month, including a brace against Sunderland at the Stadium of Light.

Wenger, meanwhile, celebrates the award for the 13th time. The Frenchman recently celebrated 17 years at the helm in North London.