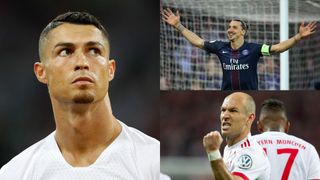 Cristiano Ronaldo's move to Juventus opens up the opportunity for the Portugal superstar to win a league title in a third different country.

But as illustrious as that list of names may be - soon to gain arguably its biggest star if Ronaldo can guide Juve to further glory - there are a select group of players who have gone one better.

Here, we take a look at five of the stars who have won league titles in four different European leagues.

A man well-known for his exploits across Europe, Ibrahimovic first tasted domestic league glory by winning two Eredivisie titles with Ajax. Three successive Serie A titles followed with Inter, before a stint with Barcelona saw him lift LaLiga in 2010. He returned to Italy with AC Milan to claim a fourth Scudetto but, after a record-breaking spell with PSG in Ligue 1, winning four championships, he was unable to steer Manchester United to Premier League silverware before departing for Los Angeles Galaxy.

It is very much 'as above' for Maxwell, whose career has followed a similar path to that of Ibrahimovic. After starting his senior career with Cruzeiro, the Brazil international racked up league titles with Ajax, Inter, Barcelona and PSG, amassing a remarkable haul of 33 trophies in total in all competitions over the course of his career.

Early success in the Netherlands is seemingly an indicator of future achievements, as this list has and will continue to demonstrate. It is with PSV, rather than Ajax, that Robben kick-started his European trophy tour, before playing a part in Chelsea's first league win in 50 years. After chalking up a second title with the Blues, Robben won LaLiga with Real Madrid in 2008 before embarking on a period of utter dominance with Bayern Munich, winning seven Bundesliga crowns since his arrival in 2009.

Sneijder is the least prolific league winner on our list, having won one title in each of the Netherlands, Spain and Italy, with Ajax, Real Madrid and Inter. The only country where Sneijder is a multiple champion is Turkey, where he topped the table twice in three seasons with Galatasaray.

Van Bommel was part of the successful PSV side of the early 2000s, eventually earning himself a move to Barcelona. The Blaugrana won the league in his only season at Camp Nou, before he moved on to become an established first-team player at Bayern, winning the Bundesliga twice. His own story of success across Europe finished with a Serie A title at Milan, before ending his career with a final season at PSV.