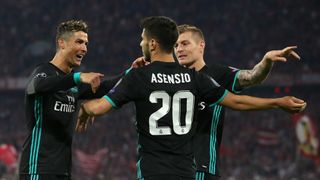 Toni Kroos paid tribute to "true champion" Cristiano Ronaldo after he sealed a move to Juventus, with a number of other Real Madrid stars also lauding the departing forward.

Ronaldo leaves Madrid after a nine-year stay in LaLiga during which he became the club's all-time record goalscorer, having won four Champions Leagues in the last five seasons.

The 33-year-old Portugal international has signed a four-year deal at Juventus following a transfer worth €112million.

And Kroos added to earlier tributes from Sergio Ramos, Gareth Bale and Casemiro, among others, to send Ronaldo his best wishes.

"Crucial for the trophies we won in the past years," he posted on Twitter. "A true champion. It was a pleasure playing with you! All the best, legend."

Crucial for the trophies we won in the past years! A true champion. It was a pleasure playing with you! All the best, legend. July 10, 2018

Lucas Vazquez, Marco Asensio and Nacho also thanked the departing great for his contributions as they prepare for life after Ronaldo.

Vazquez posted: "It's been a pleasure, Cris. Simply the best."

Asensio added: "It has been a pleasure to play by your side. You have been an example in every way. I wish you good luck in your new stage."

And Nacho took a similar line, saying: "A pleasure to defend this badge with you. You are and will remain number one. All of Madrid will remember you as a leader. Good luck in your new stage!"