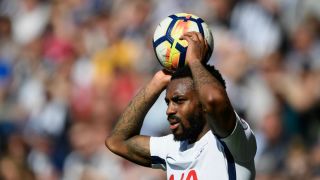 Danny Rose expects to still be a Tottenham player when the European transfer window closes on Friday.

The left-back has been linked with a move to Ligue 1 champions Paris Saint-Germain, with head coach Thomas Tuchel revealing he is a fan of the England international.

Rose, who was also on Schalke's radar, made his first appearance of the Premier League season when he was handed a shock start by Mauricio Pochettino for Monday's 3-0 win at Manchester United.

And the 28-year-old does not think he will be leaving Spurs, with PSG reportedly moving on to Bayern Munich left-back Juan Bernat.

"The manager has spoken to us all a couple of weeks ago and said everybody starts from zero," said Rose.

"We all have to start again trying to impress him and that's great. We all go again. I'm good. I'm not listening to the speculation about my future.

"If I'm here past Friday, which I'm expecting to be, which will be great, I'm looking forward to seeing what we can achieve at the end of the season.

"Me and the manager have had a conversation over the phone, as well as two one-hour meetings over the last couple of weeks.

"We're both aware of the situation. [Monday's game] was massive for me that, even though there is speculation, he still trusts and believes in me to put me into such a massive game, a game where he didn't need to change anything.

"For me, over the last four or five years we've worked together, that is probably the biggest thing he has done for me. I was so shocked in the meeting before we arrived. I thought there was going to be a change, but never did I think that it was going to be me coming in."