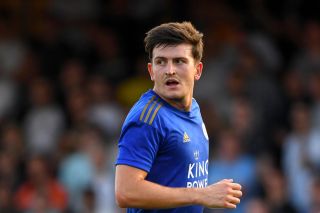 Manchester United are poised to sign the defender Ole Gunnar Solskjaer craved after agreeing a fee with Leicester for England centre-back Harry Maguire.

PA understands United will pay £80million for the 26-year-old, with the deal subject to a medical and personal terms, though with Maguire keen to make the step up the latter should prove no obstacle.

The deal represents success for both parties, with United getting a ball-playing defender who offers the ideal mix of both experience and relative youth, while Leicester’s strategy of holding their ground over their valuation of Maguire has paid off.

The Foxes will receive a world-record fee for a defender, eclipsing the £75million Liverpool paid Southampton for Virgil Van Dijk in January 2018.

United had made strengthening the centre of their defence a priority at the start of the summer, with the need only becoming more acute when Eric Bailly suffered a knee injury during their pre-season tour of China which is expected to keep him out for at least four months.

However, Maguire’s arrival will almost certainly lead to a clear-out at Old Trafford, where there are already six defenders – Bailly, Victor Lindelof, Phil Jones, Chris Smalling, Marcus Rojo and Axel Tuanzebe – in the senior squad.

The deal more than doubles United’s outlay this summer so far. Aaron Wan-Bissaka cost an initial £45million from Crystal Palace while Daniel James signed from Swansea for £18million.

What a time to score your first international goal 🙌#OnThisDay a year ago, @HarryMaguire93's header helped the #ThreeLions reach their first #WorldCup semi-final since 1990.pic.twitter.com/BvleY6baJp— England (@England) July 7, 2019

News of the agreement comes after Maguire was left out of the Leicester squad for their friendly against Serie A club Atalanta at the King Power Stadium on Friday night.

Maguire’s sale represents a tidy profit for the Foxes, who signed Maguire for an initial £12million – potentially rising to £17million with add-ons – from Hull in the summer of 2017.

Leicester were in a strong negotiating position after the Sheffield-born player signed a new five-year deal in September.

Maguire began his career with Sheffield United before stepping up to the Premier League with Hull in 2014.

Shortly after joining Leicester he received his first senior England call-up and has since won 20 caps, playing a starring role as Gareth Southgate’s side reached the semi-finals of last year’s World Cup, scoring his first international goal in a 2-0 win over Sweden in the quarter-finals.