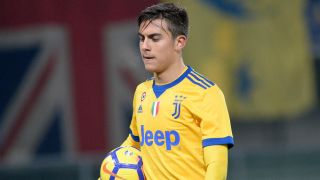 Juventus star Paulo Dybala has been diagnosed with a mild to medium thigh muscle strain, the club have confirmed.

The forward was forced off in the second half of his side's 1-0 win at Cagliari on Saturday in clear distress, with head coach Massimiliano Allegri later admitting they were unsure about the severity of the problem.

Tests carried out early on Sunday have shown Dybala has damaged a flexor muscle in his right thigh, with Juve unwilling to estimate his recovery time until at least next week.

"Paulo Dybala underwent an MRI this morning which showed a mild to medium strain to his right thigh flexor," the Serie A champions said in a statement.

"He will immediately start rehabilitation with the prognosis for return better evaluated in the coming days."

There was more encouraging news for midfielder Sami Khedira, who will require no further treatment after suffering a blow to the head, while Giorgio Chiellini is recovering well after receiving eight stitches for a wound.

Juve's win took them back to within a point of league leaders Napoli ahead of a two-week break in Italy's top flight.