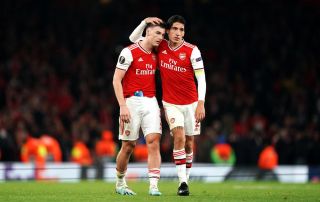 Kieran Tierney insists he made the hardest decision of his life to leave Celtic for Arsenal, but is now fully committed to helping the Gunners back into the Champions League as he shuns the bright lights of London.

The 22-year-old left-back had to wait for his Arsenal debut following his summer move as a niggling groin problem left him on the sidelines.

He made his bow in the Carabao Cup win over Nottingham Forest last week before playing all 90 minutes of the 4-0 Europa League victory at home to Standard Liege on Thursday night.

Great night! Thanks again for all your support 👊🏻🔴⚪ pic.twitter.com/fdnT1fy7eG— Kieran Tierney (@kierantierney1) October 3, 2019

Tierney was one of many bright sparks for head coach Unai Emery as Gabriel Martinelli hit a three-minute brace before Joe Willock and Dani Ceballos completed the scoring on an easy night for the hosts.

Having won eight major honours during his time at Celtic Park, Tierney is no stranger to silverware and is keen to reach similar heights now he has moved south of the border.

“We have got the potential, we have got the ability,” he replied when asked if Arsenal could break into the top four this season.

“You want to win trophies, every footballer does. But it is one game at a time for me. I am just here, I have played two games and one 90 minutes. I don’t want to get ahead of myself.

“I think the club is a massive club and it deserves to be in the Champions League. We know the ambitions and the aims of the club and supporters. We are all in it together and hopefully we can do that.

“Coming here the standard has been great for me to learn off. It has taken me a few weeks to get up to standard and scratch with the speed of the other boys, they are world class players. For me to learn off them is brilliant.

“It was a great feeling for me, but it was the hardest decision of my life as well to leave the club I had been at for 15 years. But as I say, I am delighted to be here.

“It is a massive club and everybody knows the style of Arsenal, the way they play. You learn from a young age that they play total football, the way I like to play.

“It is an absolute honour that they really liked me enough to come and get me. It is a privilege to play for the club.”

Tierney has a reputation as someone who will shun any spotlight pointed in their direction and, having been part of a close-knit family unit back home, he admits it has been hard to adjust off the pitch.

“It is a massive change for me,” he said.

“I was a home boy, I always stayed with my parents, and I’ve come down here to a different country, a massive city.

“But so far everybody at the club has helped me settle and I am very grateful for that.

“I need to cook every night so I am learning. I will get there. People say what’s the city like? I have no idea, I’ve never been in.

Scottish international Kieran Tierney has joined us from @CelticFC on a long-term deal!— Arsenal (@Arsenal) August 8, 2019

“I train, I work hard, I go home and recover and train the next day. It is just a simple life and I just put everything into football and all I can to just try and reap the rewards.”

Tierney was asked by new head coach Unai Emery not to travel to join up with the Scotland squad next week, given he is only just back from a groin problem that also plagued his final days at Celtic.

It remains to be seen if he will be handed his Premier League debut when Bournemouth visit the Emirates Stadium on Sunday afternoon as he is gradually phased into the Arsenal side.