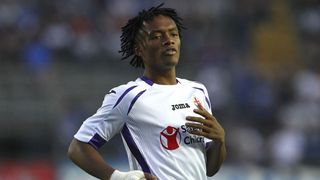 Juan Cuadrado: To Chelsea, from Fiorentina

Without doubt the highlight on Monday's deadline day was Chelsea's purchase of Juan Cuadrado from Fiorentina. The Colombia international - who caught the eye with a series of impressive performances at last year's World Cup - was linked with a move to Stamford Bridge throughout the window and finally put pen-to-paper on a four-and-a-half-year deal with Jose Mourinho's men

Andre Schurrle: To Wolfsburg, from Chelsea

Chelsea's signing of Cuadrado was largely offset by the sale of Germany World Cup winner Andre Schurrle, who returned to the Bundesliga with high-fliers Wolfsburg. Schurrle moved to Chelsea ahead of the 2013-14 season, but there was often a feeling that Mourinho never fully trusted the versatile forward to suit his style of play. A meagre five Premier League appearances this term eventually saw the former Bayer Leverkusen man opt to return to Germany.

Arguably the feel good move of the window was Fernando Torres' return to boyhood club Atletico Madrid on an initial loan deal. After struggling to make an impact at Chelsea during a three-and-a-half-year spell, Torres joined Milan on a temporary basis in the last transfer window. The Spain international failed to show the form that made him a hit during his first spell at Atleti and Liverpool, though. Milan subsequently completed a full transfer before agreeing to swap Torres to Atleti in return for Alessio Cerci

Despite already possessing a fearsome attacking trio in Sergio Aguero, Edin Dzeko and Stevan Jovetic Premier League Champions City forked out a reported £25 million to take the Ivory Coast striker Wilfried Bony to the Etihad Stadium. Bony was a fans' favourite at the Liberty Stadium after scoring 34 goals in 70 appearances.

Mattia Destro: To Milan, from Roma

Mattia Destro scored 13 goals in 20 Serie A appearances for Roma last season and is an Italy international. However, the 23-year-old striker was never a regular in Rudi Garcia's first team and he decided to take on the challenge of helping Milan return to their former glories.

Spain international goalkeeper had been without a club since leaving La Liga giants Barcelona at the end of last season. The stopper was expected to join Monaco upon the end of his contract, but a serious knee injury curtailed that deal. Valdes - who had been linked to United's rivals Liverpool - was subsequently invited to train with United and did enough to convince manager Louis van Gaal hand the Spaniard an 18-month deal.

Gabriel Paulista: To Arsenal, from Villarreal

Arsenal's problems in defence have long since been discussed among footballing pundits. Their issues at the back were increased by several injuries earlier this season and the manager Arsene Wenger admitted it would be "risky" to not reinforce his defensive options in January. A move for Villarreal's Gabriel Paulista soon materialised, though, and the Brazilian joined in a long-term deal that saw Joel Campbell move the opposite direction on loan.

One the biggest transfer sagas of the past few months finally came to an end when Real Madrid completed the signing of wonderkid Martin Odegaard. The 16-year-old, who became the youngest player to represent Norway the age of 15 last year, took some time to come to his decision. After training with the likes of Bayern Munich, Arsenal and Liverpool, Odegaard eventually moved to the European champions, with 21-year-old Lucas Silva also moving to the Santiago Bernabeu from Cruzeiro during the window.

Diminutive Swiss winger Xherdan Shaqiri was courting reported interest from Liverpool and Juventus, but he opted to join Roberto Mancini's rebuilding process at San Siro. Shaqiri was linked with an exit in the last transfer window before deciding to stay put. However, he made just three Bundesliga starts for Pep Guardiola's side this term and decided to start a new life in Italy to follow the loan arrival of Lukas Podolski from Arsenal.