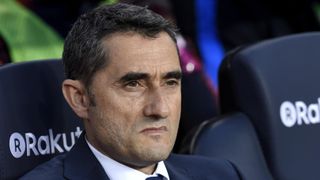 Ernesto Valverde admitted he was wrong to predict a "decaffeinated" Clasico after Barcelona were held to a 2-2 draw by Real Madrid in a thrilling match at Camp Nou.

Having already wrapped up their third La Liga title in four seasons, Barca boss Valverde suggested in his pre-game comments the match would lack its usual edge but found himself eating his words afterwards.

The Catalan giants took an early lead through Luis Suarez, before Cristiano Ronaldo equalised within four minutes and the home side had Sergi Roberto sent-off just before half-time.

"Decaffeinated nothing. This game had a lot of caffeine," Valverde told Movistar.

"It has been a very intense match. We already know what these games are like and we all want to beat our rivals.

"We started the game well, but with each blow Madrid hurt us."

Eight yellow cards and one red were shown by referee Alejandro Hernandez Hernandez as tempers flared and players scuffled, but Valverde felt his side were in with a chance of claiming all three points despite their man disadvantage.

"The match was complicated with the cards," he said. "We fought hard so that you couldn't notice our inferior numbers.

"It is clear that we had to pull together a lot and in the end we could have won."

Valverde added that the prospect of ending the season as undefeated champions was motivating Barca with three games left to play.

"It would be something incredible to be able to get it," he said. "We have to look for incentives and that is important."