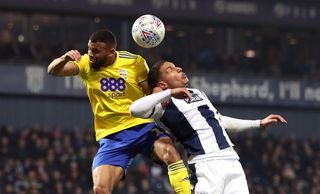 Six points clear of the play-offs, West Bromwich Albion are sitting pretty in second place in the Championship. Slaven Bilic’s men know their history too: it’s Leeds United who will be feeling a little more under pressure not to bottle another title run-in, which would leave the Baggies with a home-run into first place.

Besides a sticky seven-game period that stretched from mid-December right through to the end of January, West Brom have been stellar this season. Hal Robson-Kanu, Matt Phillips and VAR advocator Charlie Austin have provided the goods: the squad has plenty of Premier League experience with the likes of Jake Livermore and Kieran Gibbs, not to mention the all-time Premier League appearance-maker in the resigned Gareth Barry.

Potential banana skins include Fulham and Brentford, but if West Brom don’t go up this season, they only have themselves to blame.

The Blues look unlikely to get dragged into a relegation scrap or mount a breathtaking play-off push, giving their final games an inconsequential feeling only heightened by the announcement that boss Pep Clotet will leave at the end of the season.

These matches will likely provide Birmingham fans the last chance to see wonderkid Jude Bellingham turn out for the club, however, with Manchester United and Borussia Dortmund both trailing the 16-year-old midfielder.

Clotet’s team were on a five-game winless steak in the Championship before March’s unexpected hiatus, and resuming the campaign against 2nd placed West Brom is less than ideal: they haven’t beaten the Baggies in seven meetings since a 2-0 back in 2006.

Kick-off is at 3pm BST and the game is being shown on Sky Sports in the UK. See below for watching details where you are.