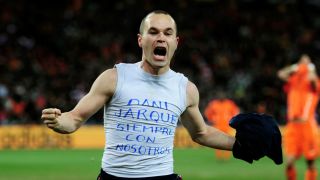 Andres Iniesta's apparently imminent switch to J-League side Vissel Kobe will call time on one of the most celebrated and decorated club careers in European football.

A product of La Masia who came to define the Barca academy's vision of footballing excellence, Iniesta has collected nine La Liga titles, having completed his career-long Camp Nou association with a domestic double in 2017-18.

That latest league title came on the heels of Iniesta scoring in a 5-0 Copa del Rey final rout of Sevilla at an emotional Wanda Metropolitano, where he collected the 34th trophy the four-time Champions League winner has lifted for club and country.

Iniesta was also the inspiration behind Spain's golden run of three consecutive major tournament triumphs at Euro 2008, the 2010 World Cup and Euro 2012 – his exploits in Johannesburg on July 11, 2010 forever etched into the nation's consciousness.

Here, we take a look back at some of the mercurial playmaker's finest moments.

Alex Ferguson could only concede, for the second time in three years, Manchester United had been beaten by greatness.

"They do mesmerise you with the way they pass it," he said after Iniesta and his partner in midfield artistry Xavi starred in a 3-1 win at Wembley in the 2011 Champions League final. "No one has given us a hiding like that."

That triumph was arguably the zenith of Pep Guardiola's spellbinding Barcelona side, coming after a 2009 2-0 win at United's expense in Rome. They were Iniesta's second and third times at the summit of European club football, having helped Frank Rijkaard's Barca past Arsenal in 2006. He ran the show in a 3-1 defeat of Juventus in Berlin in 2015 and was named man of the match.

The toast of a nation

Years of vast promise and underwhelming failure belatedly ended when Spain beat Germany 1-0 in the final of Euro 2008 to claim a first major honour in 46 years. Iniesta was named in the team of the tournament and found himself driving an international footballing dynasty by the time he lashed home an unforgettable 116th-minute winner to sink Netherlands in extra time of the 2010 World Cup final.

At Euro 2012, the Barcelona favourite was at his brilliant best – man of the match in a 4-0 final victory as Spain's assortment of playmakers without a recognised centre-forward ran roughshod over Italy in Kiev. It was the crowning moment for one of the greatest national teams of all time and Iniesta was named player of the tournament.

During his esteemed Camp Nou career, Iniesta has enjoyed countless moments to revel at the expense of bitter rivals Real Madrid. His display at the Santiago Bernabeu in November 2015 stands out, however. The beating heart of an evisceration that sent Rafael Benitez's doomed Madrid tenure hurtling towards a swift conclusion, Barca's creator-in-chief even got on the scoresheet by lashing an unstoppable effort into the top corner.

Iniesta's heroics for Spain have played a part in him regularly enjoying ovations at grounds across the country and on this occasion, even on enemy turf having wrought humiliation, fans stood to applaud one of the greats when he was substituted five minutes from time.

Iniesta also departed with the masses on their feet, tears stinging his eyes, towards the end of last weekend's Copa mauling of Sevilla. Barca turned in a display worthy of their glory years and Iniesta's goal was picture-perfect – a darting run to collect Lionel Messi's brilliant return pass, a shimmy around goalkeeper David Soria and a clipped finish on the angle.

His joyous celebratory leap into the air and a later, lingering embrace with Messi are the fairytale images that will define the fondest of farewells.