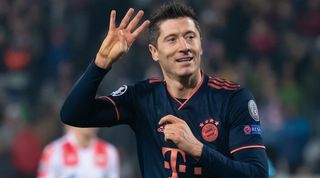 All of these players have been involved in at least five goals in the group stage – either by scoring or creating them. We’ll tell you how many they’ve scored, how many they’ve assisted, and the clubs they play for – all you have to do is name them in the six minutes allotted time.

Once you’re done, take a screenshot of your score, send it to @FourFourTwo, and we’ll share it with the world.

THEN TRY Quiz! Can you name the 50 best teams ever in the European Cup/Champions League?

Today’s Champions League draw sets us up for the last-16 of Europe’s elite club competition in the new year.

So let’s have a quick look back at the group stage, and which players have bossed the tournament so far.

These are the best attacking stars of the six rounds of group stage games, each contributing at least five goals already.

Be warned: some of the absentees are as surprising as the inclusions…