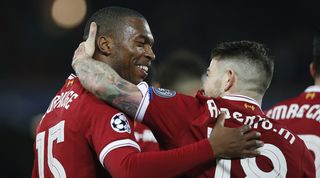 Huge things were expected of Walcott when, as a 17-year-old, he was called up to Sven-Goran Eriksson’s England squad for the 2006 World Cup. Over a decade later, things haven’t gone exactly to plan.

He’s had his moments, scoring over 100 goals for the Gunners, but the former rising star of English football is now a bona fide bit-part player at the Emirates. Walcott has failed to start a Premier League game so far this season for the Gunners, with manager Arsene Wenger preferring Alex Iwobi as his stand-in man. Yet at age 28, he'll still have something to offer the right club.

After starting the season as a regular in Eddie Howe’s side, Arter has found himself in and out of Bournemouth’s midfield over recent weeks.

The resurgence of Dan Gosling - who popped up with a couple of goals for the Cherries in December - has been the primary reason for Arter’s change in fortunes. But with Lewis Cook and Andrew Surman also both staking strong claims for a starting spot, the man signed for only £4k in 2010 could fancy his chances looking elsewhere.

A key member of Chris Hughton’s promotion-winning side of last season, Baldock was ruled out of the early part of the campaign with a calf injury, but has failed to reclaim his place since returning to fitness.

The English striker is yet to feature for the Seasiders in their inaugural Premier League season, but made his first appearance of the campaign off the bench in Brighton's FA Cup win over Crystal Palace on Monday night. With reported interest in Celtic’s Moussa Dembele, the outlook looks bleak for the former MK Dons star.

The 33-year-old made the bench for Sean Dyche’s side after 11 months sidelined through injury, but his return is likely to be short-lived. Burnley have been the league’s surprise package this season, and although sentiment calls for it, there appears to be no space in Clarets’ midfield for Marney.

Who’s interested? No one as yet, but he’d make a handy Championship addition

Seven starts and as many goals for £33m Michy Batshuayi this season makes for decent reading, but the striker is still no closer to Antonio Conte’s first team.

‘Batsman’ has already voiced frustrations at his lack of game time at Stamford Bridge, and with a World Cup around the corner the young Belgian will want to ensure his ticket to Russia with Belgium. A January loan move could be ideal for both player and club – provided that Chelsea can get a replacement.

South Korea international Lee has been at Crystal Palace for three years now, but featured in just 33 league games – and his sole start this season was notable only for his disastrous backpass that gifted Burnley a winning goal.

The 29-year-old has been used sparingly as a substitute by Roy Hodgson since the ex-England chief took charge, and needs a change of scene. At 29 he could still make an impact elsewhere, but hasn't shown too much interest in getting first-team football elsewhere up until now. With a World Cup upcoming, that could change soon.

Poor Niasse hasn't caught a break at Goodison Park since signing from Lokomotiv Moscow under Roberto Martinez this time two years ago. He was immediately bombed out by Ronald Koeman and made to train with the Toffees' kids, but rescued Everton with two goals off the bench against Bournemouth in September and scored three more goals in his next five Premier League games.

Everton tried their best to offload him last summer, but a move to Crystal Palace broke down. Niasse was a relatively expensive acquisition at £13.5m, and according to reports the Merseysiders think they can recoup the majority of that transfer fee this month. There's no shortage of suitors by the looks of things.

Frankly, there was debate last year as to whether winger Lolley – signed from non-league side Kidderminster in 2014 – was a Championship-calibre player, let alone top tier. Used sparingly by David Wagner this season, he made his first Premier League start in the 3-0 loss to Leicester but was substituted before the hour mark.

If Huddersfield strengthen this month, the 25-year-old Lolley can probably pop off to a level below this, where he has more chance of showing his attacking flair. Several Championship clubs were reportedly interested in the summer and may yet make a move.

Though labelled a flop after his club record move to Leicester from Sporting in the summer of 2016, Slimani’s scoring record for the Foxes begs to differ.

In 16 starts last season, the Algerian hit eight goals. He has five in six this time around (albeit only two of those in the Premier League). The towering striker can threaten, then, but whether he suits Claude Puel’s Leicester is a different matter altogether. Besiktas are rumoured suitors after selling Cenk Tosun to Everton – and could offer Slimani a return to Champions League football.

All eyes followed Philippe Coutinho’s move to Barcelona, but the Brazilian might not be the only star to exit Anfield this month. Daniel Sturridge has struggled at Liverpool since the departure of Luis Suarez to Barcelona in 2014, having failed to hit double figures for Premier League goals in each of the past three seasons.

The 28-year-old’s three goals in all competitions this season match the tally of young defender Trent Alexander-Arnold – but there should still be plenty of interest for a proven finisher at this level.

Recent injuries to stars Gabriel Jesus and Kevin De Bruyne have significantly altered Manchester City’s January transfer plans – and really, there's not much to be done where Pep Guardiola is concerned. A phenomenally strong squad is still a little thin, however, meaning a number of those who could have been show the exit after the New Year - namely Eliaquim Mangala and Yaya Toure - are likely to stay.

Instead, youngster Zinchenko could be granted the opportunity to earn some first-team action out on loan.

Fellaini’s absence from Manchester United’s squad in recent weeks has been a welcome reprise for his countless critics. The opinion-splitting Belgian’s continual inclusion by Jose Mourinho over the past season-and-a-half has been heavily questioned, but a recurring knee problem has sidelined him since late November and given his manager food for thought elsewhere.

Speculation about Fellaini's future remains rife: he’s set to leave on a free in the summer, so Manchester United may choose to cash in.

With Newcastle’s takeover of the club still incomplete, manager Rafael Benitez is unlikely to receive any funds for transfers. Any money he wishes to spend must come from the sale of those in his current crop.

Favourite to get the chop from Tyneside is striker Aleksandar Mitrovic. The Serbian has started only one game this season, and his departure would free up funds to bring in a new striker who could actually help fire the Magpies to safety.

In October, Long said he “couldn’t buy a goal" after a barren streak of goalscoring synonymous with his surname.

The Irishman's long-awaited goal against Crystal Palace this month was his first since last February, but it's unlikely to be enough to secure his Southampton future. Long-term, the baby-faced 30-year-old will likely have to take a step down to the Championship to rediscover his scoring touch.

No longer part of plans at Stoke – and unlikely to be looked at as a potential saviour by whoever replaces Mark Hughes – former Chelsea and Liverpool defender Johnson looks likely to leave the bet365 Stadium this month. Reports suggest parties are in negotiation to settle his contract before it expires at the season's end.

With over 350 Premier League appearances to his name, the 33-year-old's experience will interest a number of clubs – most specifically, Alan Pardew's West Brom. Apparently.

Frankly, nobody is likely to leave Swansea this month given their current woes. Ki hasn't featured for the Swans since their 4-0 drubbing at the hands of Manchester City on December 13 due to injury, is out of contract in the summer and been linked with a move to West Ham this month.

If he can return to fitness in time, the South Korean would be unlikely to turn his nose up at joining a safer Premier League side.

Given his struggles, Spurs fans were pleased to see the back of Janssen last summer.

The Dutchman joined Fenerbahce on a season-long loan and, after scoring three goals in 13 games in Turkey, could be recalled this month so that Tottenham can arrange his permanent exit. Napoli have emerged as surprise contenders for his signature, while Fenerbahce could make his move permanent. Scoring in a 2-1 win over rivals Besiktas can only have done his cause good.

Things got a bit feisty for Watford’s one-time record signing in October last year, after the Nigeria international was arrested for a bust-up with four escorts at his hotel.

Unfortunately, on-field events have done nothing to deflect attention: Success has struggled to live up to his name. The striker managed only one goal in his debut season with the Hornets and is yet to feature at all in 2017/18, in part thanks to injury. A return to Spain could be imminent.

Evans was the subject of a surprise bid from Manchester City during the summer, but the Premier League leaders aren't the only ones who'll be battling for his services this month – Arsenal are very keen, and could trump City with the lure of first-team football.

New West Brom boss Alan Pardew has done his best, but failed to convince Evans to sign a new contract at The Hawthorns. An offer in excess of £30m would be too good to turn down, and the money could be invested elsewhere – notably up front, with the Baggies struggling for goals.

Sakho pulled off one of deadline day’s most memorable stunts last summer by travelling to France without West Ham's permission, aiming to force through a move to Rennes.

After being denied at the last minute, the Senegal international hasn’t beaten around the bush about his desire to still leave east London. “I still want to leave. I always say it. I don't hide it.” Charming.