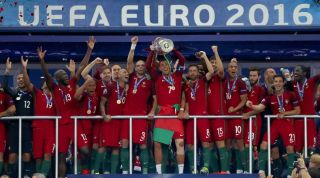 Is the UEFA Nations League a major competition? Ask FFT on Monday, when we’ll know whether England has won it.

But, whether it goes down as country-level Champions League or a glorified Intertoto Cup, there is one thing we can all agree on: the semi-finals begin tonight. (Yes, that is the best we could come up with.)

Hosts Portugal take on dark horses Switzerland in Porto, ahead of the much-anticipated (or not, depending on how things go) final on Sunday.

So we decided to take a look back at the last final Portugal were in – which is, admittedly, not very long ago.

We want you to name every player who appeared in the Euro 2016 final, where Portugal beat France 1-0. We’re giving you six minutes to name all 11 starters, plus the three substitutes who came off the bench, from both sides.

Let us know how you get on at @FourFourTwo and then challenge a mate.

Quiz! Can you name every player in England’s squad for Le Tournoi in 1997?