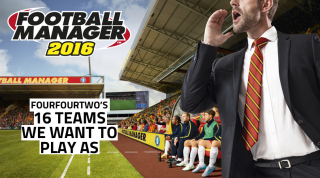 We've been hitting the new Football Manager hard at FourFourTwo Towers, and now we reckon we have the perfect handle on which are the best teams to use this year.

Not sure who to go for? Have a think about these sides: the best 16 teams to have a crack with..

Can you win the title with Arsenal and succeed where Arsene Wenger has been unable to since 2003/04? The Frenchman has set you up with a decent defence and attack. But can you find the players and tactics to push you one step further and take major honours?

A top-class striker should be top of your list, but where can you find such a man, assuming that Karim Benzema can't be turned. Higuain? Aubameyang? A transfer budget of around £64m is awaiting your decision!

The Hornets have the biggest opening transfer budget of all the new boys in the Premier League: around the £17m mark, which can of course be played around with as per usual. Their squad isn't too bad to start with either.

This gives you a great chance of keeping the Hertfordshire club up – especially given that several other teams expected to finish near the bottom of the league have nothing in the bank to augment their squad with. Spend wisely and you've a great chance of success here.

How about this for a challenge? Jorge Jesus has left Benfica to join cross-town rivals Sporting and you're charged with stopping him from taking the title with him.

You inherit a mostly intact championship-winning team, just minus the influential Lima and Maxi, but can take to the market and shop for reinforcements (to the tune of £11m) to ensure Jesus doesn't succeed in humilating the Eagles.

Can you crack the top four with a bundle of young talents at your disposal? So you've got the reliable Harry Kane, as well as Eric Dier and man-of-the-moment Dele Alli. But then there's also the upcoming Alex Pritchard, Marcus Edwards and Cameron Carter-Vickers, who should still fetch a fair price – along with the likes of Andros Townsend and Erik Lamela – if things don't work out for them.

You can push for a transfer budget of up to £21m if you're confident in the ability to reach the upper echelons of the Premier League. But settling for £17-18m to spend and agreeing on European qualification might be a shrewder decision.

YOU are Rafa Benitez's replacement. End Barcelona's chances of domestic dominance by recapturing the league title for the first time since 2012. There's plenty of young Madridistas to come through into the first team at the Bernabeu, which might be helpful: you've only got around £11m to spend at first, so don't think you'll be rolling out the Galactico transfer policy straight away.

Want to spend your way to victory? Well, choose the red half of Manchester rather than the blue (yep, you heard that). City may have a squad capable of winning the league and just a few million left in the bank with which to tinker with your squad, but United offer a mouth-watering challenge as you get some £60 million to spend.

Can you win the first post-Ferguson trophy and reinvigorate the squad with youth?

Can you match and continue the promising start to the season that Roberto Mancini has made by helping the Nerazzurri back into the lucrative Champions League, and then on to trophies?

A summer spree has you in good shape following the additions of Geoffrey Kondogbia and Stevan Jovetic, while Indonesian owner Erick Thohir has already promised more money to splash out in January to help build momentum. Exciting times ahead for Inter? You bet.

The Canaries don't have as much as Watford to spend (around £11m) but they do have a little more leeway when it comes to wages. The challenge here is to stay up and use the increased forthcoming financial deals to build a successful team and career.

A good base of support with a little room for expansion should help your long-term aims.

The south coast side are ripe for someone to go on and push forward Ronald Koeman's managerial work: a Europa League run or domestic cup would be a great achievement. But, if you can keep the squad together, and spend the available budget of circa £10m on more top young talents, then why not aim higher?

Realistically as Atletico manager, you're in charge of the only team capable of breaking the Barça-Real stranglehold. Okay, it's a huge task to overhaul such mega-powers that lurk at the Bernabeu and Camp Nou, but if you can forge an iron team spirit, carefully fostered over a season or two, then Atletico can add to their 2014 La Liga win.

Top drawer players such as Antoine Griezmann, Koke and Diego Godin should ensure that you're in the mix whatever, before you supplement to them by spending your £4m budget.

The Rams were close to the promotion shake-up last season and shouldn't be too far away this time, having made a decent start: 30 points from their opening 16 games. And having signed three proven performers at that level during the summer – Tom Ince, Jason Shackell and Bradley Johnson – they look well equipped to build on last season.

There's also a few pennies to dip into to help liven things up (£400k).

The Rhine-based outfit may have lost key attacker Son Heung-min to Spurs in the summer but they still possess exciting talents like Hakan Calhanoglu, Javier Hernandez, Karim Bellarabi and Christoph Kramer.

A gifted nucleus to the squad can be added to by taking to the transfer market and spening your budget of around £4m.

The Lancashire side have the biggest transfer budget in the Championship. If you want to mould your own team to work their way into the Premier League then this is the ideal team for you. There's a cool £2m awaiting you.

Win the Champions League with Bayern and you'll go one step further than Pep. Supplementing the likes of Franck Ribery, Javi Martinez and Arjen Robben are starlets Kingsley Coman and Pierre Hojbjerg (when he returns from loan), while Douglas Costa adds another new attacking weapon to your tactical armoury.

Go conquer Europe! And if you can't, you can spend between £21-29m in the first season by adjusting your finances.

Prefer to start right at the bottom? The Manchester new boys have a good budget for the season ahead with which to try and make it to the Vanarama National League: just one step from the Football League proper: £40k – a sizeable amount for that level.

Narrowly missing out on promotion last year, and then losing the likes of loan stars Patrick Bamford and Jelle Vossen, has set Boro up for a big season this time around.

With a decent budget (£1.4m) and Stewart Downing returning to his home club, the stage is set for promotion. The pressure's on but there's a good chance of success here in your first year and then a crack at staying in the top league, helped by the ever-ambitious Steve Gibson.

Playing Football Manager 2016? Tell us which team you're using by tweeting us with the hashtag #FFT2016