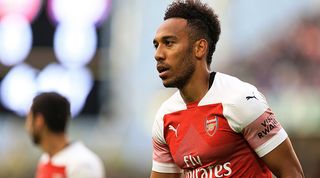 There is a wave of optimism rising at the Emirates Stadium. With Arsene Wenger having finally moved on, Unai Emery has been identified as the man to lead Arsenal into a long overdue new era.

The novelty has been embraced by Arsenal fans who have yearned for a different narrative for the best part of a decade. After seen their club complete the vast majority of their transfer business in a surprisingly efficient manner, Gunners fans are hoping for a fast start.

They’ll need it, with the fixture list having thrown them up against champions Manchester City and London rivals Chelsea in their first two games. If they come through those tests unscathed, it could be a very exciting season indeed...

Aubameyang’s electric form was one of the few highlights last season, and Arsenal fans will be eager to see what he can do across a full campaign. In 2017/18, he scored 10 goals from 13 Premier League appearances. This season he’ll be hoping to become the first Arsenal striker since Robin van Persie to break the 30-goal barrier.

He certainly has the ability, having passed that landmark several times with Borussia Dortmund. What’s most remarkable about his stats last season is that he played the majority of those games on the left flank. Even when starting from out wide, he offers a huge penalty box threat.

Arsenal’s focus on the Europa League, and Aubameyang being cup-tied in that competition, meant that many of the matches he played last season were effectively dead rubbers. Now we’ll get to see what he’s capable of when the stakes are significantly higher. The evidence thus far suggests he’ll be up to the challenge.

2. A superior away record

This one shouldn't be too hard to accomplish. Arsenal’s away form in 2017/18 was diabolical. Things got particularly bad in the second half of the season, and the Gunners had to wait until the final day of the Premier League to pick up their first away point of 2018.

One of Emery’s immediate priorities will be to make his team more robust on the road. Perhaps the key lies in midfield – while concerns remain about the composition of Arsenal’s back four, the addition of Uruguayan Lucas Torreira ought to offer them a more stable platform in front of the defence. His positional intelligence and dogged discipline should bring improved performances from the likes of Granit Xhaka. Arsenal’s defence may still be weak, but they’ll be afforded considerably better protection.

Overall, this is an Arsenal team that ought to be more organised than it was under Arsene Wenger. The indications are that they will be more aggressive and more assertive, and that should improve their results away from home.

3. A finish above Tottenham

For Arsenal to make it into the top four, someone is going to have to drop out. Manchester City look even stronger than last year, while Liverpool’s transfer activity means they ought to run them relatively close. Then it’s down to Manchester United and Tottenham, and while Arsenal would love to finish above either of them, it would be particularly sweet to re-establish their superiority over Spurs.

It’s certainly plausible. Tottenham may have clung on to Mauricio Pochettino and Harry Kane, but have they strengthened sufficiently to hold off the challenge of a resurgent Gunners side? It seems Spurs are now suffering from having to pay for a new stadium – a situation which Arsenal supporters know all too well.

After two years of trailing behind their neighbours, this could be the time for Arsenal to reclaim their place as the kings of north London.

Petr Cech made a series of errors last season that made Arsenal fans wonder if the veteran goalkeeper was approaching the end. The club’s recruitment team responded by luring Bernd Leno from Bayer Leverkusen, making the German the most expensive goalkeeper in their history.

At £19.2m, he’s actually one of the most expensive goalkeepers of all time, and were it not for the exorbitant fees paid for Alisson and Kepa Arrizabalaga this summer he would surely be attracting more attention.

At 26 (a full decade younger than Cech), Leno certainly has time on his side. However, it surely won’t be long until he displaces the former Chelsea man as first choice. Cech may have the No.1 on his back, but Arsenal have made it clear that they regard Leno as the future.

Quiz! Can you name the 30 most expensive Premier League goalkeepers?

Emery’s priority this season is straightforward: he must return Arsenal to the Champions League. However, there are two possible routes to do that. They could finish in the top four, or alternatively the club could win the Europa League.

That’s a competition in which Emery has some serious pedigree, having led Sevilla to three consecutive triumphs between 2014 and 2016. Arsenal came close to reaching the final last year, before being knocked out by eventual winners Atletico Madrid in the semi-final.

There is some stiff competition in the Europa League this year. Arsenal may have to contend with London rivals Chelsea, Sevilla themselves, or a revived Milan – and that’s before mentioning the teams that will drop in after the Champions League group stage.

But Emery has steered a side through these waters before – three times, in fact. His Arsenal will certainly be one of the favourites to make it to Baku for their first European final since Paris in 2006.