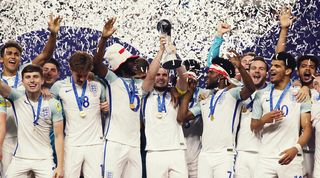 What do Sir Bobby Moore and Lewis Cook have in common? No, it’s not their penchant for a well-timed tackle. It’s not that they share their surnames with a classic British comedy duo of the 1960s. They’re both World Cup-winning captains for England.

After repeating the feat at under-20 level in 2017, Cook has yet to enjoy the luxuries that Moore did - but time is on his side.

When they lifted England’s first international title in over half a century, much was expected of the U-20 side - it still is, for many of them. Given that it’s three years today since that historic night, what’s become of that side now?

Freddie Woodman was the hero as @England U20s won the World Cup 🏆 pic.twitter.com/qb9MIK1kVaDecember 30, 2017

Newcastle United academy product Freddie Woodman starred in South Korea in 2017, picking up the Best Goalkeeper award for his efforts and saving a penalty in the final against Venezuela. With the statuesque Martin Dubravka ahead of him in the pecking order at club level, however, it was always going to be a tall order to break into the Magpies’ side in his early twenties.

Woodman instead has enjoyed spells on loan at Aberdeen and Swansea City since becoming a world champion. He was named in the team of the tournament at the 2018 Toulon Tournament and is still tipped for a bright future. His godfather is Gareth Southgate too. That helps, right?

An ever-present in England’s 2017 title, Everton’s Jonjoe Kenny was again selected for UEFA European Under-21 Championship. He scored an absolute screamer against Croatia, but England fell flat and didn’t make it out of the group in the competition – a huge disappointment, given the exploits of two years’ prior. It prepares the kids for inevitable quarter-final exits at senior level, though.

At club level, Kenny has filled in at right-back for Everton but has shown his inexperience. Loan moves at Wigan Athletic and Oxford United were nothing more than fine, before a left turn to the Bundesliga saw him link up with David Wagner at Schalke on loan. Kenny started well, but Schalke are now struggling. He’s got ample game-time in Germany though and is developing well, despite his side’s woes.

In 2016, Calgary-born Fikayo Tomori captained Canada U-20 to a 2-1 win over England. Luckily, the Three Lions managed to poach the Chelsea academy product from across the Atlantic - he’s also eligible to play for Nigeria - and have capped him at U-19, U-20, U-21 and senior level, in order to stake a claim to the classy defender.

Tomori has played in the centre of defence for both club and country but has always been seen as something of a utility player, with the ability to fill in on the right and left, too. Perhaps this is something that impressed Chelsea boss Frank Lampard, who didn’t loan him out when he took over at the club. Tomori is now looking like one of the better defenders at Chelsea and is getting plenty of minutes.

QUIZ Can you name the 30 youngest England debutants since Euro 96?

Chelsea’s Jack Clarke-Salter conceded the penalty in the final of the U-20 World Cup, but unlike Tomori, he’s not risen up the ranks at Stamford Bridge as rapidly. He was named as captain of the England Under-21 side ahead of their 2019 UEFA European Under-21 Championship campaign, but fitting for a Chelsea player, Clarke-Salter has been on loan since his big moment in South Korea - first to Sunderland, then completing a Blues rite of passage by booking an extended AirBnB stay in Vitesse.

Most recently, the youngster has turned out for Birmingham City. He’s now 22 and has plenty of competition ahead of him at his parent club - not least Tomori - but given that Tomori was always the better built of the two, it’s no surprise that JCS is taking longer to establish himself. Blues fans needn’t count him out yet.

ABSOLUTELY BUZZING #U20WC CHAMPIONS!!! Thanks for all the support along the way! 🦁🦁🦁🏆 #3Lions Kyle Walker-Peters

Much was expected of the versatile Kyle Walker-Peters following his displays in 2017. Club manager Mauricio Pochettino famously had a knack with full-backs; Serge Aurier has looked like a startled bull in Tottenham’s porcelain defence, while Kieran Trippier departed in 2019 and Danny Rose followed through the window just six months later to Newcastle on loan.

KWP looked decent too; he broke a long-standing record with three assists against Bournemouth and was tipped for big things. In between these promising signs, however, Pochettino lost his job and in came grumpy sitcom dad, Jose Mourinho. The Special One took one look at Walker-Peters and turfed him out to Southampton on loan. KWP still looks promising but is now 23. No one would be surprised if he was sold soon.

Captain Cook! 🏴󠁧󠁢󠁥󠁮󠁧󠁿@lewiscook_ goes the full 90 for @England U21s in their 2-1 friendly victory over Italy in Ferrara.#afcb 🍒 pic.twitter.com/3rNjQ7OTq3November 15, 2018

Lewis Cook was quite possibly the most exciting midfielder that England had produced since the Golden Generation. Adept at dictating play, storming forward and with a passing range to make many of his countrymen weep, he could function as a no.6, no.8 and no.10 with relative ease. He was to be the cornerstone of Eddie Howe’s Bournemouth side and a future England star.

He still could be but he hasn’t looked quite the same since a lengthy spell out with injury. Neither do Bournemouth, whose midfield lacks his dynamism when it uses Jefferson Lerma and Phillip Billing as crunchers without Cook’s finesse. Here’s hoping the former Leeds boy becomes everything he was hyped up to be.

What a feeling . CHAMMPIONSSSSSSS!❤⚽️ JO

Josh Onomah was another classy midfielder hiding in the ranks at Spurs behind taller, most physically-imposing senior figures. Since 2017, though, Onomah has completed “the reverse Dembele”: ditching north London and moving west to Fulham.

At 23, there’s still a chance that Onomah could become a useful player in a Premier League set-up - hell, it might still happen at Fulham - but taking the step down from Spurs confirmed to many that the youngster wasn’t ready to hold down a spot in an elite side just yet. Perhaps when he’s a bit more consistent.

Another of Everton’s promising young talents, Kieran Dowell is one of the lesser-known members of the starting XI that captured the U-20 World Cup in South Korea. Now 22, he’s not exactly burst into the Toffees’ team like some of his age-mates, settling instead for Nottingham Forest, Sheffield United, Derby County and now Wigan Athletic on loan.

He’s had limited minutes but Dowell is still yet to show a real instinct for goal or natural decision-making to separate him from your average lower-league, final third Joe. He’s fallen out with Aitor Karanka and had injury setbacks but you get the feeling that he’s yet to find himself as a footballer, after several loans.

After a loan in Vitesse - where the hell else? - Chelsea academy grad Dominic Solanke was crowned the Best Player at the following summer’s U-20 World Cup, following in the footsteps of Paul Pogba, Diego Maradona and Lionel Messi. He signed for Liverpool and made his senior debut against Brazil in a friendly. Everything looked set for him to become England’s next Daniel Sturridge at the very least, the next Wayne Rooney if he was very lucky.

Things are yet to come up Milhouse. Solanke signed for Bournemouth, but didn’t manage a goal in his first year of Premier League football. He’s been a good foil for Callum Wilson, impressively finding space for his strike partner and works hard for his side, but he’s perhaps not the player for England to hang their hat on. A case maybe of peaking way too early; someone who was always a step ahead mentally of kids his age, but has struggled against the bigger boys with less of an edge over them.

League One’s most expensive footballer ever, Ademola Lookman was snapped up by Everton from Charlton Athletic, the January before his World Cup exploits. The Toffees then somewhat bizarrely signed Theo Walcott from Arsenal 12 months later, and Lookman faced an uphill battle to establish himself in an already-packed squad on Merseyside.

The youngster took the same route to Germany as Jonjoe Kenny and Jadon Sancho, first on loan to RB Leipzig before signing permanently. While he’s shown flashes of brilliance in the Bundesliga, he’s still a very raw wideman and doesn’t look quite like the star many hoped he’d become. He’s at one of the best places in Europe to develop, though.

Dominic Calvert-Lewin's goal for England, in the U20 World Cup final. #EFC pic.twitter.com/e7ZFTzV6j7June 11, 2017

Dominic Calvert-Lewin was already getting game-time at Goodison Park when he became the first Englishman since Geoff Hurst to score in a World Cup final. Since then, he’s nicked the No.9 shirt at club level and gone from strength to strength: he’s arguably the biggest success story from the tournament for the Three Lions.

Calvert-Lewin has cemented himself as a perfect partner up front for Richarlison under Carlo Ancelotti and there seems to be a lot more to come from him. After signing a long-term deal with Everton too, the 23-year-old will command a large fee were he to move any time soon.

Originally an MK Dons academy talent alongside Dele Alli, Sheyi Ojo moved to Liverpool and was given his debut in 2013. He’s still contracted to the Reds but has spent time on loan in France at Reims since the 2017 World Cup.

Under Stevie Gerrard’s tutelage at Rangers, Ojo’s looked good. Given how strong his parent club are - especially when it comes to wingers - it’s unlikely that Ojo will ever see his name written regularly on Jurgen Klopp’s dressing room whiteboard but a decent midtable career could still beckon.

A utility man of the 2017 squad, Ainsley Maitland-Niles has desperately been trying to shake that tag at club level too. Arsene Wenger used the Hale End youngster in the centre of midfield and at left-back (following an injury crisis, not just for giggles). Ains himself claimed in an interview that he prefers a right-wing berth, but then Unai Emery went and signed Nicolas Pepe for Arsenal. Typical.

Current boss Mikel Arteta turned Maitland-Niles into a fine inverted right-back early in his tenure, but dropping him for Sokratis and bringing in Cedric Soares on loan suggests that the 22-year-old would rather fight for a place elsewhere on the pitch. He’s looked competent in most positions he’s tried: it’s just about finding that niche for AMN.

Simpson had a modest CV of spending the 90s traipsing through the midlands in an average lower league playing career, before taking his coaching badges; it’s been given a hell of a reference by guiding the U-20 England side to international victory.

The Carlisle-born coach is still at the helm of the U-20s. Aidy Boothroyd and Gareth Southgate are above him at the U-21 and senior levels of the game, making Simpson the most influential man in English player development that you’ve probably never heard of.

Ukraine triumphed at the U-20 World Cup in 2019. So maybe anyone can win this thing and our kids weren’t all that great anyway.