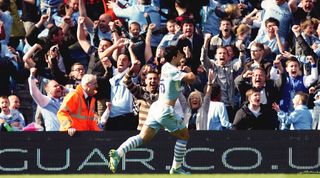 You never forget the game that won your side the title.

Sometimes - as in Arsenal's case - the title is clinched at the ground of your rivals. Arsene Wenger's men mathematically won the Premier League at Old Trafford and White Hart Lane in 2002 and 2004 respectively.

Other times, it's a rout - such as Chelsea's 8-0 demolition of Wigan Athletic. In Manchester United's case, it usually comes in just any old game that you'd usually forget.

But then sometimes it comes in the final seconds of the season. We don't need to remind you about that one.

We're looking for the line-ups that played in the games that clinched the Premier League title. In the cases in which the league was won by another team dropping points - see Leicester's win in 2016 coming when Tottenham drew away to Chelsea - we'd like you to name the line-ups from the match before.