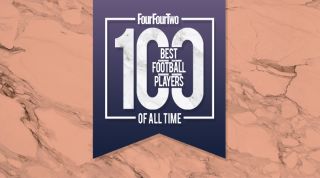 Why are they here?
With one of the odder career trajectories among modern-day greats, Hagi spent the best part of a decade as an impossibly prolific attacking midfielder in Romania’s top flight, before two hit-and-miss years at Real Madrid and later a similar spell at Barcelona.

Sandwiched between his time at the two Spanish giants was a heartwarming two years in Italy, where he was part of Mircea Lucescu’s ‘Little Romania’ contingent at Brescia. He endured relegation in his first season but stayed loyal to the club despite better offers, and fired them back into Serie A.

Aged 30 and supposedly winding down towards retirement, he joined Galatasaray, where he spent a laughably fruitful half-decade cementing living-legend status and hoovering up another 10 medals.

Career highlight
USA 94, when Romania reached the quarter-final of the World Cup (knocking out Argentina on the way), inspired by Hagi and his magical left foot.

Why are they here?
Despite only standing at 5ft 7in, Portugal’s diminutive 1966 World Cup captain was a formidable presence for both his country and Benfica, with whom he won two European Cups in the early 1960s.

The original box-to-box midfielder, team-mate Eusebio described Coluna as "the glue who held us together". He could also play at the back or up front, and cajoled his team-mates with a mixture of humour and passion.

Career highlight
In 1961, he thumped home an unstoppable effort from long range in his side's 3-2 victory over Barcelona in the European Cup final in Berne.

Why are they here?
Only four Argentines have been crowned as top scorer in La Liga, and Kempes is one of them. He was feared as a burly and effective striker for Valencia, scoring at will, especially in 1976/77 and 1977/78. Kempes also led the club to a European Cup Winners' Cup triumph in 1980.

However, he is best known for his explosive finishes during the 1978 World Cup on home soil. He nabbed six goals and was top scorer of the tournament.

Career highlight
How about scoring two goals in a World Cup final for a highlight? Kempes netted twice against Holland, including the all-important winner in extra time.

Why are they here?
Neymar is the next big thing after Lionel Messi and Cristiano Ronaldo. The 25-year old has not only taken football to new frontiers, but he’s also sustained an incredible level of performance. It’s unbelievable to see how much he has already achieved with Barcelona, Santos and the Brazilian national team (where he's scored 52 goals already, so Pele's record of 77 is an achievable target).

Assuming his personal life and aggressive career management don’t harm his game, he should be able to prove - along with Gabriel Jesus and Philippe Coutinho - that his country’s best days are definitely not behind it.

Career highlight
Neymar was the subject of criticism over his conduct as national team captain, but overcame that pressure to win Brazil’s first Olympic gold medal in men's football in 2016.

Why are they here?
A holding midfielder with Penarol who was equally as comfortable at centre-half, Uruguay’s captain played a pivotal role in his country’s shock win over Brazil in the 1950 World Cup.

After the coach had left the dressing room before the match, Varela instructed team-mates to ignore instructions to play a defensive game, and instead to attack their hosts “without any fear”. Uruguay did precisely that – and stunned Brazil by overturning a 1-0 deficit to win the World Cup.

Career highlight
Varela deliberately began spats with English referee George Reader to slow the Brazilians down and prevent them building up a head of steam after going ahead - and his playacting worked a treat.

Why are they here?
Nominated by former team-mate and compatriot Pele in his list of the 125 greatest footballers, the two-time World Cup champion was the first Brazilian to collect 100 international caps. He started just one game in the 1958 World Cup but was still chosen as the best full-back of the tournament. So that must have been some display.

Along with left-back Nilton Santos, Djalma Santos rarely held back, starting the Brazilian tradition of attacking defenders and providing a template for the position's future.

Career highlight
In the final of the 1962 World Cup against Czechoslovakia, Santos set up the final goal scored by Vava for Brazil.

Why are they here?
A question that might have been asked earnestly in England five years ago, perhaps, but not now. Sweden’s magnificently grumpy serial champion has long since transcended pub debate territory and become an undisputed modern-day great.

That was the case even before his casually tremendous stop-off at Old Trafford, last season merely the confirmation that a man who’d won 13 league titles in 14 seasons in four countries was, actually, a rather decent striker (even if his two titles at Juventus were erased due to Calciopoli).

Some players have had comparable physical and even technical capacities to Ibrahimovic – although that first touch is truly gorgeous, somewhere between Velcro and velvet – but barely any have had the aura.

Career highlight
Is it parochial to choose the four-goal performance of scissor-kicking splendour against England in 2012? If so, let’s go with his 2010/11 season. Banished from Guardiola’s Barcelona and with his elite-level usefulness under serious question, he returned to Italy to lead a patchwork Milan side to their only Serie A title of the last decade.

Long read: The making of Zlatan – friends and foes reveal the rise behind the legend

Why are they here?
One of those players whose greatness only dawns on you over time. Lahm was present and crucial to a number of era-defining sides of the modern era – Jupp Heynckes’s Bayern Munich, Joachim Low’s Germany and latterly Pep Guardiola’s Bayern – and yet his understated style meant for a long time that his majestic standards went underappreciated.

Not any more, though: Lahm retired this summer as a bona fide modern great, a footballer of astounding intelligence and technique who played two very different positions to absolute perfection. His medal collection (from World Cup triumph with Germany to every trophy worth winning at Bayern) provides sound evidence of a career well spent. “Perhaps the most intelligent player I have ever trained in my career,” reckons Guardiola. “He is at another level.”

Career highlight
Reinventing himself as a central midfielder, with astounding ease, to captain Guardiola’s shimmering Bayern side to three consecutive Bundesliga titles.

Why are they here?
Arguably the greatest header of a ball ever, Kocsis scored at incredible rate. He found the net 75 times in 68 games for his national side, winning the Olympic tournament in 1952, and averaged more than a goal-per-game in his seven seasons at Honved, winning three league championship titles.

Kocsis moved to Barcelona in 1958 and won La Liga in his first two seasons in Catalonia, although his spell there was sadly interrupted by injuries.

Career highlight
Kocsis was the top scorer with 11 goals at the 1954 World Cup, where a majestic Hungarian team should have won the trophy, but lost to West Germany in the final.

Why are they here?
The original great German goalkeeper, Maier was an ever-present in the Bayern Munich side which won four Bundesliga titles between 1968 and 1974. He was also a mainstay of the side that dominated the European Cup in the middle of the decade, winning the trophy in 1974, 1975 and 1976.

Maier was the embodiment of consistency, both in terms of performance and selection. He recorded a 13-year sequence of unbroken league appearances between 1966 and 1979 – 442 matches in total (good number, Sepp). This still stands as a national record.

Internationally, he also started in goal for the West German sides that won the 1972 European Championship and 1974 World Cup.

Career highlight
Winning a personal treble with Bayern and West Germany, as he collected the Bundesliga title, the European Cup and the World Cup in 1974.