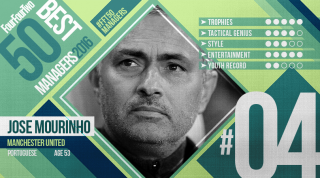 He wouldn’t like to admit it, but as he gets comfortable in the office he’s been pining after for the last decade, Jose Mourinho probably has a hell of a lot to thank Claudio Ranieri for right now.

In any other year, the reigning champions self-destructing as spectacularly as Chelsea did last term would have been the story of the season, no contest. As it was, Ranieri’s masterminding of one of the all-time sporting triumphs relegated those flounderings in west London to second billing, and Mourinho’s reputation – while lightly bruised – has remained sufficiently intact to see him handed the very job he has been not-so-secretly hankering after since acquainting himself with the Old Trafford touchline back in 2004. Grazie, Claudio, grazie mille.

But still, football’s most distinguished supercoach has dropped three places on this year’s list for a reason, and have no doubt about it: his side’s collapse last season was a debacle of cinematic proportions, encompassing everything from tragedy (the travails of Radamel Falcao) to farce (the “three rats” episode) to genuine ignominy (the Eva Carneiro saga), and much else in between.

And at each stage, it was difficult to absolve Mourinho of central responsibility. Just as it was his singular personality that drove Chelsea to a dominant league title a year earlier, so his temperament seemed to be the cause and catalyst of last year’s mad tailspin. When Roman Abramovich finally sent him packing in December, Stamford Bridge reduced to scorched earth, it seemed less an act of ruthlessness and more one of festive goodwill.

Fast-forward six months and a well-holidayed Jose had barely gotten his feet back under the desk before he’d thrown a few barbs the way of some old enemies, posted off sizeable cheques for a few high-end players, and laid out his own targets with characteristic bullishness.

“I want everything,” he said at his unveiling earlier this month. It was like he’d never been away.

So quite the year, all in all, for Mourinho. Yet it’s a funny quirk of football that he’s landed his dream job precisely as his stock has dipped to its lowest point since he first fought to the top with Porto in the mid-noughties.

And yet while the past 12 months have heightened doubts about his capacity to deliver anything other than the blowtorch of short-term success, his anointment to the Manchester United throne is due to a CV that details a sure-fire guarantee of trophies. What’s more, they’re trophies won with exactly the sort of fiery belligerence that has been absent from Old Trafford in the club’s bleak post-Ferguson years.

As last year showed, that belligerence when taken to extremes can be more likely to bring misery and meltdown than medals. But provided Mourinho has learned the lessons from last season generally – and his shameful treatment of Carneiro specifically – then his signature brand of antagonism could be just the thing to awaken the gently snoozing giant of European football.

The other staple pub debate to be had is one of aesthetics. And the allegations about Mourinho’s style aren’t without substance: when push comes to shove – which is to say, in the big games and during title run-ins – he almost always opts for caution.

As such, a near-superhuman ability to absorb pressure has been a feature of all his major trophy wins (his title-winning Real Madrid side won a pivotal late-season game at the Nou Camp with 28% possession; his Inter team famously advanced from the same venue with only 24% possession en route to the Treble).

But this big-game instinct has perhaps skewed perceptions. Mourinho may never be likely to send his side into a crunch match with reckless attacking abandon, but that’s not to say his teams are strangers to flair and festivity: of the eight league titles his career has brought, six have been won with his side finishing the season top of the scoring charts.

The truth of the matter is that pragmatism is Mourinho’s dogma. He will adopt whichever style is most likely to see his side defeat the opposition, and with his squad that now includes not just the force and finesse of Zlatan Ibrahimovic, but the piercing ball-carrying abilities of Henrikh Mkhitaryan, Marcus Rashford and Anthony Martial, the smart money is on Old Trafford being treated to more appetising fayre than was served up by the last guy.

The even smarter money is on England’s modern-era superpower wasting little time in scaling its old heights, and doing so with the sort of dead-eyed resolve that breathes fear into rivals.

For those harbouring doubts about his suitability to Ferguson’s throne, it’s this detail – rather than the ones about defensive football, youth players or three-year cycles – that should resound the loudest. Mourinho doesn’t just bring trophies, he brings an aura of swaggering supremacy that spreads through an entire club. He doesn’t just win leagues, he flicks Vs at everyone else on the way. And that, more than youthful exuberance or buccaneering wingplay, is the United Way.

Those who look at a motley job history and question just how long he’ll stay at Old Trafford are almost certainly right to do so. But they are also missing the point. Mourinho may be a short-termist appointment but that is the reality of football today, certainly at the level United operate at: the dynasty-building dictator is dead, replaced by the freelance supercoach.

In this sense Mourinho is the perfect man to drag a club still living in Fergie’s shadow kicking and screaming into modernity.

Mourinho will not replicate Ferguson’s decades-long project of trophy-hoarding, but nor will anyone else. The real concern shouldn’t be how long he’ll stay at the club, but what state he’ll leave it in.

In the meantime, though, United have a perch to reclaim – and as such, they’ve got the right man for the job. As Mourinho told reporters this month: “I would never be able to work without success.”