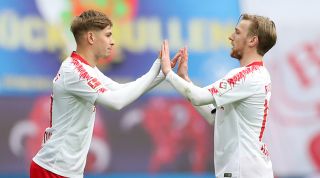 Arsenal realised the Under-17 World Cup winner could benefit from first-team football last season. The problem was that their attempts to get Smith Rowe some experience backfired when he was injured after joining RB Leipzig. He went on to make three substitute appearances, but two of them only began in the 89th minute.

Yet if the first half of the campaign hinted at his ability, when he scored twice in Europe, Unai Emery didn’t grant him a minute in the Premier League. And with Reiss Nelson back from Hoffenheim, Smith Rowe won’t even be the first young winger in the pecking order. His opportunities at the Emirates could be limited.

OPINIONProject Youth 2.0: Why Arsenal's problems can be solved from within

Frank Lampard is able to testify what an excellent loanee Tomori can be: the centre-back was named Derby’s player of the year for his efforts under the new Chelsea manager. But the Blues’ reluctance to sell Kurt Zouma to Everton suggests that the Frenchman is wanted at Stamford Bridge.

That gives Lampard four senior centre-backs, along with Antonio Rudiger, Andreas Christensen and David Luiz. After three stints in the Championship for Tomori, it doesn’t make sense to send him down a division again. Chelsea should look for a Premier League borrower.

Ole Gunnar Solskjaer’s faith in youth is a keystone policy, but that doesn’t mean he ought to retain all of Manchester United’s youngsters. Mason Greenwood’s pre-season performances suggest he is ready for first-team football at Old Trafford, but with Daniel James arriving there may not be room for them, Angel Gomes and Tahith Chong in the same squad.

Dutchman Chong, who turns 20 in December but has only four first-team games to his name, may be the one with most to gain from a spell elsewhere.

Woodburn can testify that loans are not always positive experiences. He went to Sheffield United last season, only played 23 minutes of first-team football after August and went from flagship signing to forgotten man. He found himself unable to displace Mark Duffy, a veteran of non-league, in Chris Wilder’s promotion-winning side.

Yet if it was a wasted year, the Welshman is still only 19. The key may be to find a club who will install him in their starting XI, rather than one offering a bit-part role. Wigan, who lost the influential Nick Powell this summer and who play the right brand of football, could be an ideal destination.

If Woodburn and Wilson had different experiences when loaned out to Championship clubs last season, Liverpool’s Wales internationals should be sent to different divisions this year.

Wilson’s 18 goals for Derby included some spectacular strikes. But whereas his fellow loanees Mason Mount and Fikayo Tomori could feature for Chelsea this season, the Reds hopeful has more obstacles in his path. Jurgen Klopp can field a second-choice forward line of Divock Origi, Rhian Brewster and Xherdan Shaqiri. He has six major midfielders.

So it makes sense to send Wilson to a lower Premier League club; perhaps, given their lack of goalscorers, Newcastle would suit all concerned.

The suggestions that Phil Foden should be loaned out last season were not rooted in realism. But Manchester City do have a teenage talent who will be deprived of chances at the Etihad Stadium and could flourish elsewhere.

Bernabe, a Spaniard who joined from Barcelona in 2018, showed his talent with a lovely pass to set up David Silva’s goal against West Ham in the Asia Trophy. Given City’s family of clubs, they should have no problem finding somewhere for the winger or midfielder to ply his trade.

If most of the other players who would benefit from loans are youngsters, there are exceptions. Everton have signed so many players in recent seasons that their squad features several they would like to sell but who, realistically, few would buy.

Bolasie, already 30, out of contract in 2021 and who has never recaptured his form since suffering a cruciate ligament injury in 2016, is a case in point. His short-term stint at Aston Villa last season was underwhelming, but his ability and trickery could tempt someone else to borrow him.