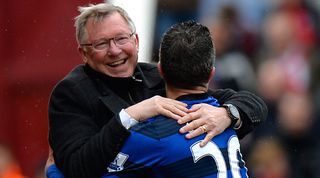 Clearly Alex Ferguson didn’t want his last season to be 2011/12 and Manchester City winning the Premier League in injury time, so he cranked his red engine into life once more for a crack at the title. His 13th, which is just a bit ridiculous the more we think about it.

But do you remember the players who scored the goals that saw the Old Trafford side triumph? Not that it was just Manchester United lads in the goals, mind you. A total of 27 players - the highest number since the days of 42-game seasons - made it into double figures in 2012/13.

That includes four Arsenal players, while a footballer each from Liverpool and Spurs broke the 20-goal mark. Pretty decent players they are, too.

Enough clues! It’s time you got quizzing. You have seven minutes of Fergie time to get as many as you can, then tell us your scores @FourFourTwo (we’ll retweet the best if you don’t give any answers away). Challenge some pals while you’re at it too, eh? Ta.

(Please note: Adblockers can stop you seeing our quizzes, so turn them off  if you’re having any issues. Thanks!)