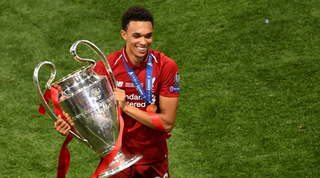 "Nobody grows up wanting to be a Gary Neville" as the famous Jamie Carragher line goes. He may have had a point, with right-back not always considered the sexiest position on the field in days gone by. Times are changing, however, with the role having a greater impact on attacking play and team shape than ever before. Here, we take a look at the ten best.

The Belgian has registered just one assist in Ligue 1 this season, having shared his right-back berth with emerging talent Colin Dagba throughout the campaign. The reason: PSG coach Thomas Tuchel needs the injury prone 28-year old fit and firing for Champions League assignments. Meunier remains one of the continent’s most potent threats from out wide, and has the defensive discipline to back it up. Hard-working, intelligent, an excellent crosser and a leader on the field, Meunier’s a class act for club and country.

The Portuguese joined Barcelona for €35m in 2017 and has quietly gone about making the right-back spot his own. Semedo offers lightning pace and quick feet, making him almost like an extra forward when he whizzes past Lionel Messi on the overlap. The 26-year-old still needs to improve his final ball, and can frustrate at times, but makes up for it with solid defensive performances and marauding runs forward.

After a difficult 2018/19 season, which was hampered by injuries following the World Cup in Russia, Carvajal has bounced back this campaign. The four-time Champions League winner has seemed leaner and more focused as Real Madrid keep the pace just behind Barcelona at the summit of La Liga, chipping in with five assists and two goals. Carvajal’s tactical discipline and fitness mean he is capable of joining attacks while never shirking his defensive responsibilities. A genuine all-rounder and leader for club and country.

That the World Cup winner isn’t even the highest-ranking Bayern Munich right-back on this list is a little odd, but there’s a good reason for this. Bayern signed Pavard for a hefty fee from Stuttgart in the summer of 2018 in order to allow right-back Joshua Kimmich to move to the base of their midfield. The German champions have barely missed Kimmich’s contribution from wide thanks to Pavard’s excellent displays. Good in the tackle, neat on the ball and a right foot like a wand, the 23-year old is a nightmare for opposition strikers and defenders alike. Oh, and who could forget the goal he scored against Argentina in the World Cup? Absolute magic.

A few eyebrows were raised when Leicester City chose to fork out €22m on a little known Portuguese right-back in the summer of 2018. Pereira has made that price-tag look an absolute bargain, however, with consistently excellent performances. The 22-year-old has made more tackles than anybody in the Premier League this season - pipping a player further up this list to top spot. He’s also a handful going forward, as his three league goals this season contest. It's not only Fantasy Football managers taking notice, with Europe’s elite clubs also keeping tabs.

It almost seems impossible Achraf Hakimi is just 21. The Moroccan has shown remarkable maturity since joining Borussia Dortmund on a two-year loan back in the summer of 2018. He’s played left-back when required - which was most of last season due to Dortmund’s poor planning - and looked at ease despite being on his “wrong” foot. Now back on his favoured side, Hakimi is showing himself to be one of the most exciting young full-backs in Europe. Quick doesn’t even begin to describe it, and his 14 assists and five goals since moving to Germany are testament to his attacking qualities. Whether he gets a chance at Real next season, or chooses to move away permanently at the next opportunity, promises to be one of the more interesting storylines of the close season.

One of the most consistent performers for Pep Guardiola’s back-to-back Premier League champions, Kyle Walker has everything you could want from a modern full-back. He’s quick, strong, disciplined, has bags of stamina and a great end product. It’s not hard to see why Pep made him the most expensive defender in the world when recruiting him from Spurs in 2017 for a fee of £50m. His 12 assists in 130 appearances for Manchester City is a decent enough return, though in truth his marauding runs down the right flank are key to freeing up space for players such as Bernardo Silva and Riyad Mahrez to drift in off the wing and cause havoc. A proper defender to boot, no forward enjoys an afternoon with Walker on his case.

Described by former Arsenal star Martin Keown as the best one-on-one defender in the Premier League after the Manchester derby in February, the 22-year-old’s battle with Raheem Sterling that afternoon made for incredible viewing. Usually so much stronger and faster than defenders, Sterling suddenly found himself up against a player who actually fancied a physical battle. Wan-Bissaka emerged on top, and it’s no surprise that United took the points that day.

Wan-Bissaka maintains the best tackling rate in Europe, with 84.6% of his duels won, according to Opta. Wily, strong, fast and full of confidence, the Englishman’s performances have played a crucial role in United’s rapid improvement under Solskjaer since Christmas. He could still improve going forward, but that £45m price tag is beginning to look a steal.

Kimmich could easily be the best right back in the world if he wasn’t so focused on becoming the world’s best defensive midfielder. Following in his idol Philipp Lahm’s footsteps, the 24-year old’s transition into a deep-lying playmaker was necessary if only to involve him in his team’s play as much as possible.

He’s still often deployed in his old position, though, especially when Bayern and Germany find themselves up against elite opposition. In these moments, fans are treated to near virtuoso performances every time. Kimmich is an excellent defender, nullifying forwards with his intelligent reading of the game, but it’s his attacking play that sets him apart from so many others. 48 assists and 21 goals in little over 200 appearances for Bayern is testament to this. His crossing ability is up there with the world’s finest and he takes remarkable care of the ball, rarely giving away possession.

Add to this an almost nasty streak, fearless leadership qualities and experience beyond his years and it’s hard to argue Kimmich isn’t already as valuable to club and country as the legendary Lahm.

Right-backs aren’t supposed to be this important to reigning European champions and Premier League leaders. Yet so much of what makes Liverpool such a force is the displays of their talismanic Scouse defender.

Alexander-Arnold is only 21-years-old, but is already one of Europe’s most consistently excellent performers. His 12 league assists this campaign are bettered only by City's creator-in-chief Kevin De Bruyne, while his vision and passing range aren’t far behind the gifted Belgian either.

There’s almost a cockiness to Alexander-Arnold’s play; 60-yard passes are regularly pinged, with laser beam precision, from his supposedly weaker left foot. This confidence was in full display in last season’s Champions League semi-final second leg against Barcelona, when his cheeky corner took everyone except Divock Origi by surprise. It was a moment of genius, and a goal which will go down as an all-time great Champions League moment.

Murmurings of a move into midfield, a la Kimmich, won’t die down anytime soon, with fans keen to see him get on the ball as much as possible, but as things stand Liverpool have an incredible weapon from wide.

There’s a great deal of talk about England’s enviable youth pool, with players such as Jadon Sancho and Phil Foden expected to light up major tournaments in years to come, Trent might just be the best of the lot.