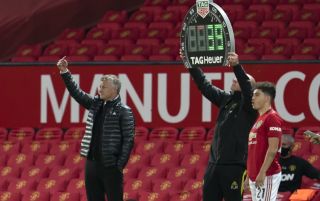 When the adoption of the five substitutes law was only a hypothetical, it was easier to remain open-minded about its effect. Now that it’s destined to be a permanent law change, any tactical theorising is secondary to what’s likely to become a further advantage for the most affluent clubs.

The superficial issues are obvious. The bigger teams will build the bigger squads, and invariably be left with the greater array of weapons on their bench. In addition to which, those extra players are likely to be very talented. Rather than fill the extra seats on the sideline with generic types and the kind of players that every club can afford, it will just be another place in which to stack seasoned internationals and gifted gamechangers.

It’s also a change which, in one sense, is happening at precisely the wrong moment. With UEFA set to temporarily relax the rules around Financial Fair Play – or potentially even redesign the legislation in response to Manchester City’s victory at the Court of Arbitration for Sport – the checks on spending aren’t what they might be. The long-term effects of the global pandemic will create a natural restriction of sorts, but – again – that will disproportionately affect the less well-off and curb the spending patterns of clubs who aren’t funded by sovereign wealth funds or Oligarchs.

One way of spinning this is to present the extra substitutions as a tacit protection against burnout. It’s a valid point, because the physical burden placed on modern players is exorbitant and only likely to increase. The hope will be that this is a law change that promotes greater recovery time for players and, over the course of a season, lessens their time spent on the pitch.

ANALYSIS 7 things Marcelo Bielsa will bring to the Premier League

Viewed from another angle, though, even that positive is skewed. Whereas a perennial Champions League participant may now be able to share pitch minutes around between a wider group of players, what of those on the other side of the velvet rope? For instance, while Tottenham would welcome the chance to spare the legs of Son Heung-min on his return from international duty and could replace him with Steven Bergwijn, Lucas Moura, or Erik Lamela, Burnley are unlikely to be quite so eager to rest Dwight McNeil – without whom, Sean Dyche’s entire side would look very different.

In that example, the point isn’t to claim that Son, Bergwijn, Moura and Lamela are all the same calibre of player, but to illustrate that it’s easier to use this new facility if that wealth of resources exists. If the implication is that this change is in the interests of players like Son, then that also suggests that it will dramatically favour those clubs that can afford to buy and employ someone of his abilities. The distribution of assets in the Premier League is clearly not even. Consequently, the protection of assets will not have an effect which is evenly felt.

In a previous column, it was also suggested that the extra tactical latitude could lead to innovation. That remains true and there are all sorts of interesting quirks and evolutions which might take place. But with whom does that power to experiment really lie? If, for instance, this is the dawn of the temporary substitution, in which players of specific abilities are introduced in response to a particular threat or opportunity, then what kind of club is likely to be able to bear the cost of carrying these pinch-hitters?

Allowing five substitutes permanently is dangerous, because it so favours the wealthy clubs, but the extra tactical purchase could also create interesting new trends. For @FourFourTwo.https://t.co/miEVtNP57qJune 29, 2020

Alternatively, maybe having five substitutes will allow head coaches to make changes in blocks, targeting specific weaknesses in their opposition, but – again – while civilian clubs are using academy players, journeymen and flawed wingers to attack a weak right side, their superiors will be marching a small army of Kevin De Bruynes onto the pitch.

Previously, we’ve asked clubs to withstand a barrage of early punches and then capitalise in the relative parity that follows. Now, we’re ensuring that Ivan Drago never gets tired and that he carries the same power in the 12th round as he did in the first, second and third. It’s actually a terrifying prospect and one which ensures that Rocky never has a chance.

So, this is something to resist. It’s a development which comes with curiosities and which will alter the game’s competitive fabric in a novel way, but it’s also a change which – again – will inadvertently reward those clubs in a position to take advantage of it.