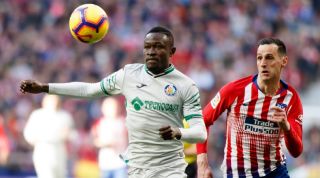 Djene was the subject of a £12.8m bid from Monaco this month but it was swiftly rejected by Getafe.

Djene has made 22 appearances this campaign and Getafe are once again performing well, finding themselves in seventh.

Everton, Bournemouth, Crystal Palace and Southampton are all believed to be linked to the defender.

However, it is Arsenal and Spurs who are the biggest clubs interested, according to the Sun.

It's no secret that Arsenal are in the market for a centre-back, especially following the long-term injury suffered by Calum Chambers.

The new Gunners boss Mikel Arteta has even said publicly that the injury to Chambers will force them to adjust their transfer plans.

Another Arsenal centre-back, Shkodran Mustafi, could leave this month - another reason to recruit reinforcements.

Meanwhile, Spurs are understood to be one short at the back and have reportedly been scouring the market for a good deal.

Jose Mourinho is keen to make sure he is sufficiently equipped to challenge for the Champions League places in the second half of the season.

Djene has a contract until 2023 and is estimated to cost north of £22m.

The 28-year-old has 49 caps for Togo and can also double up as a right-back.

But this season, Djene has only picked up two yellows which is a considerable improvement.

Peter Crouch: I thought baked beans were the secret to Gareth Bale’s success