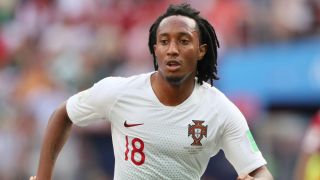 Gelson Martins has agreed a five-year deal at Atletico Madrid, arriving at the Wanda Metropolitano on a free transfer after opting to walk away from crisis club Sporting CP.

The Portugal international was one of nine players to rescind their contracts after Sporting's turbulent end to the 2017-18 season, which descended into chaos after the club's then president Bruno de Carvalho publicly criticised players on social media following a Europa League defeat to Atletico.

In response, a group of radical supporters interrupted training, smashed up the changing rooms and attacked players, which led to the likes of Gelson tearing up his deal, which had four years left to run.

Earlier this week, Sporting insisted the club would not give up hope of keeping hold of Gelson, whom new president Jose de Sousa Cintra claimed was being "badly advised".

The 23-year-old winger played 140 games for Sporting and has 19 international caps, including a substitute appearance in Portugal's 1-0 win over Morocco at the World Cup in Russia.

"Our club is incorporating a pacey right winger who has also been deployed as a second striker and even at right-back," read an Atletico statement.

"His speed and fine dribbling skills make him a valued addition to our team and a threat to the opposition's defenders."

The Atletico squad are currently in Singapore, preparing for International Champions Cup matches against Arsenal and Paris Saint-Germain on Thursday and Monday.