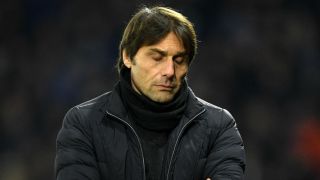 The outcome of Chelsea's Champions League round-of-16 clash with Barcelona will not have a decisive impact on head coach Antonio Conte's uncertain position, according to Deco.

Chelsea have mounted a disappointing defence of their Premier League title and sit fourth in the table, 19 points behind runaway leaders Manchester City.

They face a demanding European encounter with LaLiga frontrunners Barca at Stamford Bridge on Tuesday, followed by meetings with Manchester United, City and Crystal Palace in the league before the return fixture at Camp Nou next month.

Conte has been widely tipped to depart the Blues at the end of the campaign after just two seasons in charge.

Nevertheless, former Portugal international Deco, who starred for both Barca and Chelsea during his playing career, does not expect club owner Roman Abramovich to dispense with the coach based on the two legs of the Barca showdown.

"I'm not in the daily routine of Chelsea, Chelsea nowadays is a big club and all big clubs have the pressure of [needing] victories, even being in England, where managers tend to stay longer," he told Omnisport.

"But Chelsea's history is not the same of other English teams, of course this will be a challenge. To be defeated by Barcelona won't be a disaster. Of course, Chelsea wants to get through, but I don't think their manager's work will be evaluated by this. That's a problem [for] them and they know what to do."

Deco feels the departure of two key players in the off-season has exerted a negative impact on the team's fortunes, as they battle to finish in the top four and retain their berth in UEFA's elite club competition.

"To lose Diego Costa and [Nemanja] Matic, they were two important players to Chelsea, even though [Alvaro] Morata had a very good beginning, he's not a substitute for Diego yet," he said.

"The way Chelsea played... [they haven't] found yet the same football they had last year.

"But problems are normal, when you don't win and don't achieve the goals of such a big club like Chelsea, it's always difficult."