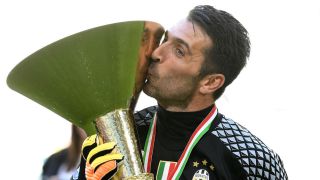 Juventus goalkeeper Gianluigi Buffon deserves the Ballon d'Or based on his current form, not his reputation, according to team-mate Giorgio Chiellini.

Buffon will lead Juve out in Cardiff for the Champions League final on Saturday at the age of 39, having showed no signs of slowing down in another fine season for Massimiliano Allegri's men.

And centre-back Chiellini feels any plaudits coming the Italy shot stopper's way should focus on his recent performances, rather than what he has previously achieved in a storied career.

"I don't agree with people claiming Buffon should win the Ballon d'Or for what he's achieved - he deserves it for the level he's showing now," Chiellini told a news conference.

"I've been fortunate to play in front of him for almost the entirety of my career and I can't even remember what it's like not to have him behind me making the hardest saves look easy."

While he, Buffon and fellow defensive stalwarts Leonardo Bonucci and Andrea Barzagli are all in their 30s, Chiellini is hopeful this Juve team can continue together in years to come, building on reaching two European finals in three years.

"I don't foresee wholesale changes coming, at least in the short term," he added.

"Obviously, over the years, the odd player will come and go, but change is part and parcel of football."

Head coach Allegri praised his players, too, claiming that some observers have taken a remarkable Serie A title - their sixth in a row - for granted ahead of the clash with Real Madrid.

"[The players] have been fantastic," he said. "I've heard many times that the title was easy. Recording 91 points is anything but easy. Roma and Napoli had a superb campaign and Juventus did even better.

"Nor was it easy to win the Coppa Italia and make the Champions League final, yet we've gone all the way on all fronts.

"The players have had an extraordinary season and I thank them, but now we must make one last big effort and be more up for the game than Real on Saturday."